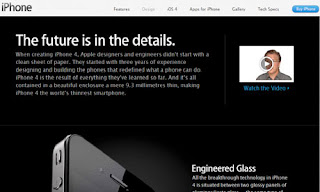 Don't believe anyone who tells you size doesn't matter because in the world of mobile phones it's who's got the smallest that counts. Apple was forced to get out its measuring tape (the iTape?) after it was challenged over its claim that the iPhone 4 was the "world's thinnest smartphone". Oh yeah, but what about the Samsung Galaxy S II phone, eh? In stepped the Advertising Standards Authority (ASA) to sort things out after it received a complaint about the boast in an iPhone ad. Turns out parts of the Samsung phone, at just 8.71mm, are indeed thinner than the iPhone 4's uniform thickness of 9.3mm. But – and this is crucial – parts of the Samsung are also thicker, at a whopping 9.91mm. "Apple pointed out that the Galaxy S II had prominent bulges at the top of the device," reported the ASA in its ruling on Wednesday. "Apple said consumers would not be interested in the thinnest part of the device, but in its overall measurements, as these would, for example, affect whether the device could fit into a pocket or purse." The ASA agreed with Apple "because the iPhone 4's thickest point was thinner than the thickest point of the Samsung Galaxy S II" – and the complaint was dismissed. Forget about length, it's all about the girth.
Posted by Toukir Rahman