Amazon Tablet Is Now In Stores

0 amazon, News And Information, Technology 8:01 AM
Amzon tablet kindle fire price $199.
Amazon has successfully launched the new Amazon tablet and enter the world of tablets.This new amazon tablet has 7 inch color touch screen including dual core processor, kindle fire, a new mobile tablet devices which is introduced by Amazon.It is just similar to the iPad.Now you can find it in the stores. 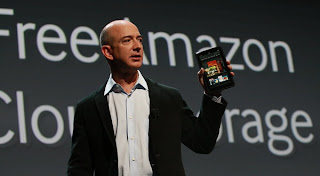 The companies founder and cheap executive said that "I think of it as a service" and "Part of the Kindle Fire is of course the hardware, but really, it’s the software, the content, it’s the seamless integration of those things."

Amazon is counting on the its vast online warehouse of more than 18 million e-books, songs, movies and television shows, as well as access to a selection of Android applications, to help it beat competitors like the iPad and the Nook from Barnes & Noble. Previous Kindles were only e-book readers with black-and-white screens.

The access to content is important as Amazon transforms its business into a digital retailer and responds to consumer demands for mobile devices, lest it winds up in a retail graveyard like Borders, a former peer.

As Amazon started its journey with the cheapest price tablet ever cost only $199 where even the most cheapest ipad cost around $499 is taking online orders and will able to start shipping them at the middle of november.

The new kindle fire easily fits in your hand and tablet weight is just even less then a pound.Also it is build on the most popular e-reader.

Amazon is hoping it appeals to a broader audience that also wants to browse the Web and stream music, movies and video from a mobile device. The Kindle Fire also has access to a virtual newsstand that includes content from magazines like Wired, Vanity Fair and Cosmopolitan.