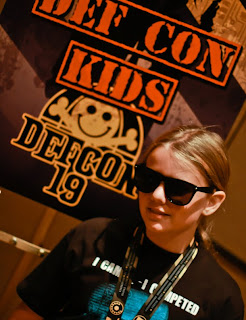 This is amazing that a 10-year-old hacker who goes by the pseudonym CyFi revealed today at DefCon 19 a zero-day exploit in games on iOS and Android devices that independent researchers have confirmed as a new class of vulnerability. The girl from California first discovered the flaw around January 2011 because she "started to get bored" with the pace of farm-style games.

CyFi said, "It was hard to make progress in the game, because it took so long for things to grow. So I thought, 'Why don't I just change the time?'" Most of the games she discovered the exploit in have time-dependent factors. For example, planting corn might take 10 real-time hours to mature in the game. Manually advancing the phone or tablet's clock forced the game further ahead than it really was, opening up the exploit.

She is not revealing at this time which games are affected because of reasonable disclosure, thus giving the vendors that make the affected games a chance to respond.

While many games will detect and block this kind of manipulation, CyFi said that she discovered some ways around those detections. Disconnecting the phone from Wi-Fi made it harder to stop, as did making incremental clock adjustments.

CyFi's mother, who must remain anonymous to protect her daughter's identity, said that at the end of CyFi's presentation at DefCon Kids they would offer a $100 reward to the young hacker who found the most games with this exploit over the following 24 hours. The reward is sponsored by AllClearID, a identity protection company that is also sponsoring the DefCon Kids. This is the first year of DefCon Kids programming at the conference, a reflection of the fact that members of the hacking community are getting older and raising families.

Already an artist who has performed an improvised, 10-minute-long spoken word piece in front of 1,000 people at the San Francisco Museum of Modern Art, a Girl Scout, and a state-ranked downhill skier, CyFi revealed that she was only a little bit nervous about having to speak in front of the 100 or so expected attendees. She admitted that while it was probably different publicly speaking about a topic with such a specific focus, it would be hard for her to imagine what those differences might be. "Well, I haven't done it yet," she said.
Posted by Toukir Rahman