0 facebook, facebook apps, facebook videochat, Social Networks 3:42 PM
Video chat startup TinyChat has released its first iOS app, TinyChat FB, which allows you to video chat with up to 12 Facebook friends from your smartphone. TinyChat co-founder Dan Blake tells me that what sets TinyChat FB apart from other services like Fring or Tango or even Skype is the fact that end users don’t need to have the service installed in order to participate in a chat. Facebook, which just launched its video-calling partnership with Skype, still doesn’t have this functionality for mobile.
Users can connect to the app with Facebook after download and it will immediately show them a list of their Friends. Clicking on a user will allow you to invite them to chat, sending them a link on Facebook with the message “I’m video chatting on my iPhone, click the link to video chat with me.” Toggling back to your Friends list will allow you to invite others to the chat and you can remove users by pressing long on their name in the Users tab. 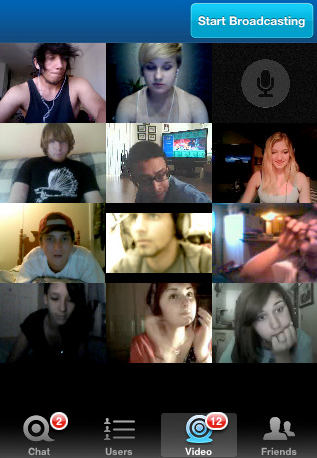 TinyChat FB works on the iPad 1, iPad 2, iTouch 4, iPhone 3GS and iPhone 4. The web component is Flash-based.
My biggest issue with this is that I can’t think of any reason why people would want to Facebook video chat with 12 people. Blake insists that people do, namely teenagers. “Tiny Chat right now doesn’t have a Buddy List and that’s where it needs to be,” he says “Skype is definitely the juggernaut. We’re here to give you more creative ways to use TinyChat over Skype.”
He also says that this app isn’t the be all end all for TinyChat mobile, and that a full featured client for the service is on its way.
TinyChat does over 30 million minutes of video chat a day according to Blake, bringing on a 100K new users a day. The app has raised $1.5 million in funding from triumvirate of Ashton Kutcher, P.Diddy and Lady Gaga and others, who, come to think of it, would probably make a pretty interesting video chat group.

You can get this video chat facebook app from :
Here
Posted by Toukir Rahman