0 hackers, hacking, News And Information 1:06 AM
We all know about hackers and hacking the website of gov sites. This time syrian ministry of defence website has been hacked. The group of hackers known as Anonymous has taken over the Syrian Ministry of Defense website (currently down) and posted the following message on its homepage:


“To the Syrian people: The world stands with you against the brutal regime of Bashar Al-Assad. Know that time and history are on your side – tyrants use violence because they have nothing else, and the more violent they are, the more fragile they become. We salute your determination to be non-violent in the face of the regime’s brutality, and admire your willingness to pursue justice, not mere revenge. All tyrants will fall, and thanks to your bravery Bashar Al-Assad is next.

To the Syrian military: You are responsible for protecting the Syrian people, and anyone who orders you to kill women, children, and the elderly deserves to be tried for treason. No outside enemy could do as much damage to Syria as Bashar Al-Assad has done. Defend your country – rise up against the regime! – Anonymous”

Scrolling across the top of the website are links to videos illustrating the unrest, deaths and civil injustice in the country. At the foot of the website are a number of links to protest group websites, Facebook pages and Twitter profiles all campaigning against the actions of Syrian President Bashar al-Assad and the military. 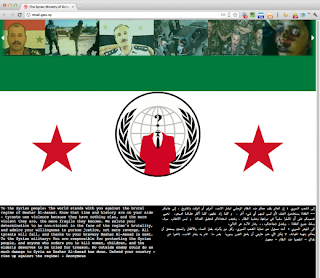 The site’s source code also includes a message which includes the name “Poppy”, who i assume is the one responsible for the hack.

As recently as yesterday Syrian forces targeted areas that are openly against the government despite criticism and calls from neighbouring countries to bring an end to the violence.

Protests in Syria began on 26 January in response to other protests in the Middle East. Protesters are calling for political reforms and the reinstatement of civil rights.

Anonymous has been in the media regularly of late because of its involvement with partner hacking group Lulzsec. Most recently however, it made headlines for claiming to have hacked into about 70 mostly rural law enforcement websites in the US. According to the Guardian, Anonymous said it had stolen 10 GB worth of data in retaliation to the arrests of its sympathisers in the US and Britain.

Previously Anonymous gained mainstream media coverage for Project Chanology, the protest against the Church of Scientology.
Posted by Toukir Rahman