Apple co-founder Steve Jobs announced on Wednesday that he is no longer fit to serve as the apple chief executive officer, officially resigning from the position, which has been filled by Chief Operating Officer Tim Cook.

The announcement came Wednesday evening in a press release directed at the Apple Board of Directors, as well as the company's community. Jobs said he would like to stay on as Chairman of the Board, director and Apple employee, a wish that was granted by the board.

"Steve's extraordinary vision and leadership saved Apple and guided it to its position as the world's most innovative and valuable technology company," said Art Levinson, Chairman of Genentech, on behalf of Apple's Board. "Steve has made countless contributions to Apple's success, and he has attracted and inspired Apple's immensely creative employees and world class executive team. In his new role as Chairman of the Board, Steve will continue to serve Apple with his unique insights, creativity and inspiration."

He also recommended that Cook, who has fulfilled Jobs' duties as CEO during his medical leave, take over as the chief executive. The board also agreed with Jobs' assessment, and  Tim Cook is now CEO.

"The board has complete confidence that Tim Cook is the right person to be our next CEO," Levinson said. "Tim's 13 years of service to Apple have been marked by outstanding performance, and he has demonstrated remarkable talent and sound judgment in everything he does." 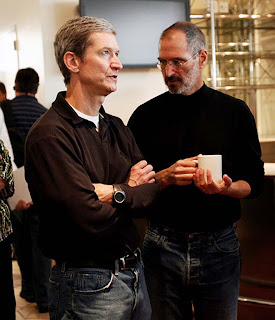 Jobs' resignation was submitted to the Apple Board of Directors Wednesday. His role on the board, as well as Cook's election to the board, are both effective immediately.

Jobs has long maintained that his health is a private matter. His public letter issued on Wednesday made no mention of his current medical condition. Jobs had been on medical leave since January, and has had a long about with cancer.
Posted by Toukir Rahman