0 apple, Mac, Mac OS x Lion 4:27 AM
I know, there are some things about OS X Lion you just hate. I feel the same way. Major changes in the tech we use daily are not always welcomed, and the transition hardly ever goes smooth or in a timely manner.

9to5Mac has pointed out that some creative developers have put together a one-click solution for those who aren't comfortable cracking open Terminal and changing system level settings, the app is called Lion Tweaks. 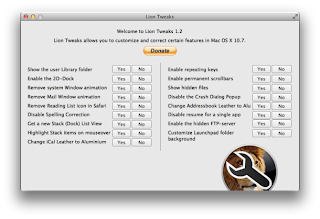 From here, it's as simple as selecting Yes or No on any of the settings you would like to change. Ranging from making the invisible scrollbar in Lion permanently visible, revealing the Library folder, to removing animation from some apps such as Mail.

Below are some examples of the tweaks in action:

The 3D dock (top) can be changed to a 2D dock (bottom), similar to that found in Snow Leopard.

For some the leather look of iCal in Lion is a great change, for others it's a bit too much. Lion Tweaks gives you the option to change from a leather to an aluminum appearance. (The same change can be made for Lion's Address Book).

The tweaks shown above are just three of the 17 total tweaks possible with Lion Tweaks.You can always reverse a tweak by running the app again and selecting No.

Pls Take Note: some of these tweaks can and will change the behavior of some apps, not just appearance. When tweaks like those made in this app are made, they can sometimes create issues with the app(s). I strongly encourage you either have a Time Machine backup or create a backup of the app's package before making any tweaks should things go wrong.

If something does go wrong, you can always restore the backed-up app package--allowing you to either try again or retain the stock settings.
Posted by Toukir Rahman