0 firefox, firefox 5, firefox 6, firefox extention 6:54 PM
Google Music (still only available in the US) was developed so that no matter where you go and what device you use, you always have access to your music. You’re basically uploading all your music files to Google Cloud but, what if you wanted to download a file to a different computer? Google Music Downloader is a Firefox extension on that conveniently lets you downloads songs that you’re playing in Google Music. The extension in no way lets you download songs that aren’t already your own and shouldn’t be considered a means of downloading free songs. 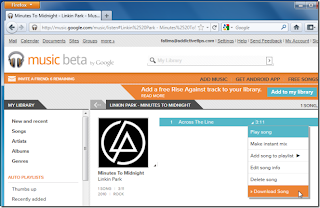 The extension adds a Download Song option to the the dropdown menu next to a song’s name. To download a song, select and play it from your library. Next to the song’s name is a small triangle indicating a sub-menu, click it and select the last option in the menu. A notification from Firefox will pop-up. To start downloading the song, click the notification. The song will be downloaded via the Firefox download manager. The extension also adds a small headset like icon in the add on bar that lets you toggle the extension on and off. If you’ve got a a song or an entire playlist running on loop, the download notification will pop-up each time a new song starts.