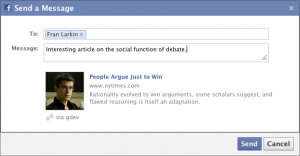 Facebook has rolled out the Send button, a function that provided a simple and direct way for users to privately share content through the platform. Though it has not garnered as much attention as the Like button, this feature can be viewed a huge success considering that the social network says it has already been installed on more than 100,000 sites. Nearly two months later, Facebook has followed up the Send button with a new feature called Send Dialog. In this article, we will discuss the feature in more detail and explain how a marketer can take advantage of the Send Dialog to engage their audience.

The Send Dialog function has much more in common with the Send button than the obvious. Both features are similar in that they allow users to share private information with others. However, Send Dialog goes one step further by giving users the ability to share content as private Facebook, group, or email messages. According to the social network itself, this feature is even better than the actual button from an integration standpoint because it enables developers to make conversation the core functionality of the website or app it is added to. We agree, but also want to add that the Send Dialog is just better all around, mainly because of its marketing potential.
Having the freedom to include a personal message with your link adds a new dimension to Facebook’s sharing feature. Some of the content you publish on your website is probably self explanatory. For example, if the content is an article with a descriptive title, a simple link could be all a visitor needs when sharing it with their friends or colleagues. On the other hand, a video that is only accompanied by a still preview image may require a little extra in the form of an explanation to convey its value to others. When looking at it from this perspective, the Send Dialog feature benefits the marketer by arming users with a more effective way to be advocates for their content, which it does by coupling a messaging element with the already powerful sharing component.


Use the Send Dialog Wisely

The Send Dialog function is it sort of like an email, and it would be best for a marketer to treat it as such. In fact, Facebook says that it is most appropriate in a situation where a user might share the information via email otherwise. The company warns that it should not be used to deliver impersonal communications like in-game status or invitations, citing that the “Requests” feature is still the best channel for such actions. For this reason, marketers may need to school their audience on how to use Send Dialog while stressing the importance of respecting the privacy of others.
Facebook’s new Send Dialog definitely appears to have a lot of potential. We can especially see it being useful for marketers with active audiences looking to add a new element to social sharing. The feature has already been implemented by a few popular websites, so its true potential should be revealed in the very near future.
Posted by Toukir Rahman