BlackBerry Bold 9900 – The Perfect Blend of Touch and Type

0 blackberry, Cellphone news, touchphone 1:59 AM
The Bold 9900 from BlackBerry marks a mix of the old and the new. The old, because it retains the prototypical BlackBerry physical form, and the new because it is one of RIM’s finest efforts at incorporating touchscreen technology. Although BlackBerry have released touchscreen phones before these had sought to emulate the full frontal design made popular by phones such as the iPhone. The Bold 9900 is the first attempt to bring this touch functionality to a more traditional BlackBerry style design.This is good news for a number of reasons. Firstly, the design employed by BlackBerry is their main selling point, and the thing that has made BlackBerry phones so popular with their users. This includes business professionals and also a lot of the younger generation who need a speedy means of tapping out messages. It is also good news because it provides the perfect blend of physical typing and touchscreen features, a mixture that is not really on offer from purely touchscreen phones.
With many onscreen keyboards being awkward to use at best, having a QWERTY keyboard at your disposal makes it far easier to write emails and text messages. The Bold 9900 also benefits from being the first BlackBerry phone to feature RIM’s new BlackBerry OS 7. OS 7 was initially intended to be OS 6.1, a minor update to their previous operating system. However, RIM felt that the changes made were so significant that it deserved to be classed as a whole new integer version in itself.
OS 7 now features Liquid Graphics. This is the perfect feature with which to make use of the new touchscreen features, as it speeds up interface transitions and also provides a much more enjoyable visual experience. The graphics are impressive indeed, and the Bold can handle it with ease thanks to the increase in processing power (1.2GHz which is almost double that of the last BlackBerry Bold). 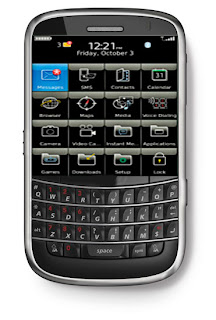 The Bold 9900 deals out an impressive 5 megapixel camera that includes 720p video recording, making it the best BlackBerry phone for taking pictures or recording those special moments. Of course, the Bold 9900 also comes with the features that you would expect from any BlackBerry handset including BlackBerry Messenger and BlackBerry Maps, and for professional users comes with DocsToGo.
Many phone companies have been quick to jump on the full frontal touchscreen bandwagon and RIM, for better or worse, is one of the few smartphone companies that has stuck to its guns and tried to retain its unique niche. The Bold 9900 deals the perfect compromise between the iconic BlackBerry design and all of the latest touchscreen wizardry that is available, and is the ultimate phone for all BlackBerry lovers.
Posted by Toukir Rahman