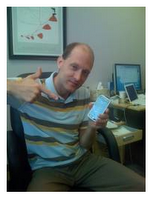 Clearly not satisfied with hacking into MacBooks and iPhones, Charlie Miller has his eyes on the chip that control your computer’s battery.

Miller, a brand-name hacker who now works as Principal Research Consultant at Accuvant Labs, will use the Black Hat stage to discuss the embedded controller used in Lithium Ion and Lithium Polymer batteries. In his research, he found that the controller is used in a large number of MacBook, MacBook Pro, and MacBook Air laptop computers.

As reported by Andy Greenberg at Forbes.com, Miller found that the batteries’ chips are shipped with default passwords, such that anyone who discovers that password and learns to control the chips’ firmware can potentially hijack them to do anything the hacker wants.
Posted by Toukir Rahman