The Audi A7 Review 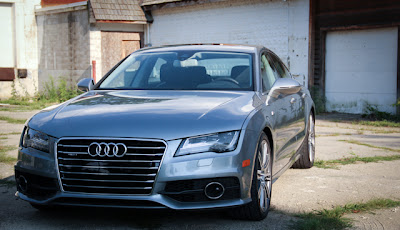 The Audi A7 is different. The executive five-door fastback sits nearly atop Audi’s lineup, starting out at $59k with my tester wearing $80k on its window sticker. Excluding limited run sports models, a fully decked-out A7 is the third most expensive car Audi sells, placing only lower than the massive A8 sedan and R8 supercar. Still, even looking like a modern and practical station wagon, the A7 is a niche car but perhaps one with a broad appeal.
The 310HP 3.0 TFSI supercharged V6 screams within the engine compartment yet the A7′s full-size stature prevents it from achieving true sports sedan status. The 2+2 seating configuration doesn’t make for the best people mover. Even the rear fifth door seems to suggest that the A7 has plenty of room for cargo, but it doesn’t; the trunk’s effective storage space is actually rather small. This identity crisis is further supported by the sheer number of creature comforts and available technology packages. The A7′s big brother, the stately A8, is Audi’s flagship and the A7 is not going to challenge that title. Yet the A7, despite the strange downsides, might actually become the most memorable Audi from this current generation and define the brand for years to come. 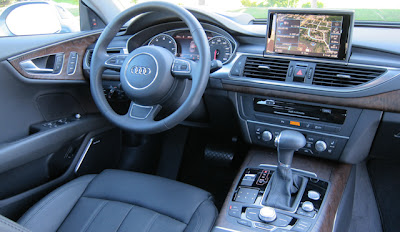 It’s clear from the moment you sit in the driver’s seat that the A7 is all about technology. Audi threw nearly everything in the sedan. It’s loaded with the best the company has to offer through an accessible and functional interface. This system, centered around a rotating knob, is a staple in the current Audi lineup. A power user-retractable center mounted 7-inch screen handles most tasks, with another screen embedded in the dash cluster providing the driver with additional controls and functions.
Neither of the screens are touchscreen, yet four soft buttons surrounding the rotating knob allow additional controls as dictated by the selected screen. A small touchpad does provide for some fun tricks, though. When in radio mode, six numbers glow indicating favorite stations while navigation destinations can be inputted by writing them out with a finger. It’s clever.
Audi’s MMI is among the top infotainment systems currently on the market. The system is clean, organized and best of all, lacking in drama. For example, Ford’s MyFord Touch system has a huge “Wow” factor but almost an equally huge learning curve. That’s not the case with Audi’s MMI. You sit down, put your hands on the controls, and go, “This is nice.” 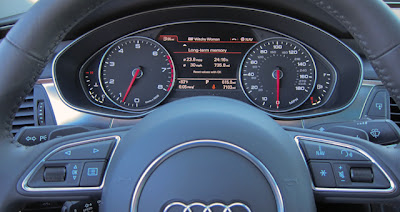 The best part of the A7′s infotainment system is, strangely, not the main screen but rather the LCD in between the speedo and tach. This sort of screen has been a staple throughout VW’s brands for years; what makes the screen found in the A6, A7, and A8 different is the size. It’s not a small squarish screen but rather a large LCD that curves around both gauges in an attractive and natural way.
This screen is exactly like the one found in the A6 and A8, and can control most media, telephone and navigation functions. There’s also an enhanced trip computer, fuel efficiency gauge, and compass. A steering wheel mounted scroll wheel and two-way navigation button makes flipping through the tabs and menus a non-issue. This simple control scheme sets it apart from competitors. 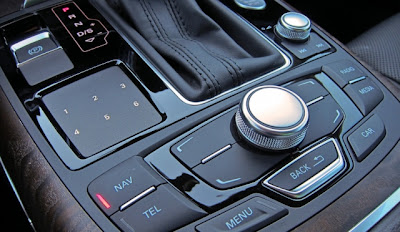 The A7 boosts several other tricks not normally associated with OEM infotainment systems. An Nvidia GPU provides unparalleled smoothness to the UI. Audi uses Google Earth for the navigation and it’s not a gimmick. Zooming in and out is a breeze, done with just a twist of that central knob, while the touchpad interface handles the destination input. A constant data connection through an embedded cellular modem provides the data stream and updated info. (There’s a SIM card slot right in the dash) That same data connection can be turned into a hotspot within the vehicle, permanently removing road trips as a way to escape Facebook.
T-Mobile is the data source of choice and Audi dealers supply and install the SIM card upon vehicle delivery. It’s up to the car’s owner to pay the bill but they’re not tied down to T-Mobile — any SIM card tied to a data plan will work. This connection allows for more than just Google Earth. Through the my.audiusa.com portal, owners can send destinations to the vehicle’s nav system and update address books. The data connection also feeds weather, gas price info and weather info right to the car.
My tester was fitted with the $5,900 Bang & Olufsen option. Turn the car on and twin tweeters proudly rise out of the dash. Owners can pop in a CD and the system impresses with crisp highs and solid lows throughout a full soundstage — just don’t turn on SiriusXM and brag about how much the system cost. The expensive audio system actually disappoints when the source material is anything but the best. SiriusXM is weak and flat while HD Radio has a sort of crackle — and forget about FM. Car manufacturers have lately turned to bespoke audio companies for their expertise and branding. The B&O system in this Audi is more about the latter. Listen to a lot of Eagles CDs? Opt for it. Everyone else should save their cash.

Not all the technology is about fun and games. The A7 has an optional night vision mode that turns the secondary display within the dash cluster into an infrared scope. The view is rather limited, and I found, at least during the warm week in August I had the A7, it didn’t pick up animals or even humans. This makes the function teeters on the edge of being a novelty but could potentially be helpful when the air outside is cooler.
The A7 also packs a standard assortment of next-gen collision detection tools and safety features: multifunction heads-up display, blind spot monitoring, adaptive cruise control, front and rear radar sensors, back-up cam, and a rather annoying blinking light that flashes on the dash and HUD when you tailgate someone even at low speeds. The top of the line Prestige model, which I had as a tester, even features adaptive headlights that pivot 15 degrees when turning. Most of the safety features are found within the A7′s $5,800 Innovative Package; I can’t imagine the car without any of these. In fact, I daresay that these functions are the second part of the A7′s draw but not the primary.
Audi vehicles sell because they are awesome driving machines. The A7 wears the Audi badge with honor, and does it credit. It’s a fantastic experience, but one marred ever-so-slightly because of its aforementioned confusion. The 3.0 TFSI provides more than enough juice for the A7 to sprint to 60 MPH in a spirited 5.4 seconds. The 8-speed Triptronic is smooth and efficient as the A7 is rated at 18 mpg in the city and 28 on the highway. I bested the EPA’s numbers and saw 29 mpg during a 350 mile trip to Lake Michigan.
The A7 is a blast to drive and should provide enough thrills for most. It’s a proper sports sedan masquerading as a fastback. The Quattro all-wheel drive system helps the A7 hug the road while a self-deploying rear spoiler rises out of the fifth door for some additional helpful downforce at speeds over 80 mph. The A7 shares a wheelbase length with the A6 and is just 1.1-inch longer overall. In fact the less-expensive A6 measures up almost better than the A7 with slightly more rear seat head and leg room. Plus it has a rear center seat. The A7 is, in a sense, an executive long wheelbase sports hatchback. (get that?) 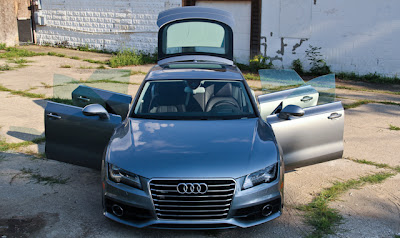 You see, upon first inspection, the A7 fits the old adage of jack of all trades, master of none. It seems like its sports car ambitions are limited by the fastback sedan design. It looks much longer than the A7 feels. It’s also not a proper sedan as it only seats four; the rear middle seat is a plastic console. The luggage compartment is technically large as the rear plastic decks attached to the fifth door are removable. But when they’re attracted allowing for use of he rear window, the space is a just a deep, but short compartment.
But none of those traits are potential deal-breakers. They combine to give the A7 a honestly unique feel. The A7, especially when considering its high-tech cabin, is a car built for a new type of buyer that wants something radically different, which the A7 achieves in the most subtle, but effective ways. It’s easy on fuel, a blast to drive, and loaded with accessible technology. I was, in the end, pleased.
Posted by Toukir Rahman