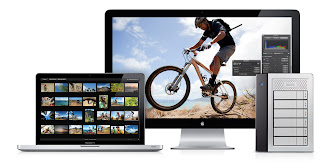 Powerful technology from a powerful collaboration.

Thunderbolt began at Intel Labs with a simple concept: create an incredibly fast input/output technology that just about anything can plug into. After close technical collaboration between Intel and Apple, Thunderbolt emerged from the lab to make its appearance in Mac computers.
Intel co-invented USB and PCI Express, which have become widely adopted technologies for data transfer. Apple invented FireWire and was instrumental in popularizing USB. Their collective experience has made Thunderbolt the most powerful, most flexible I/O technology ever in a personal computer. 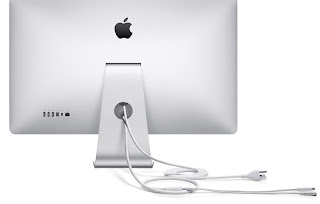 One small port. One giant leap in possibilities.

MacBook Air, MacBook Pro, iMac, and Mac mini now give you access to a world of high-speed peripherals and high-resolution displays with one compact port. That’s because Thunderbolt is based on two fundamental technologies: PCI Express and DisplayPort.
PCI Express is the technology that links all the high-performance components in a Mac. And it’s built into Thunderbolt. Which means you can connect external devices like RAID arrays and video capture solutions directly to your Mac — and get PCI Express performance. That’s a first for any computer. Thunderbolt also provides 10 watts of power to peripherals, so you can tackle workstation-class projects. With PCI Express technology, you can use existing USB and FireWire peripherals — even connect to Gigabit Ethernet and Fibre Channel networks — using simple adapters.
All that power and blazing-fast data transfer flows through the Apple Thunderbolt Cable, one of the most advanced cables ever made. No single cable has been able to do so many things and do them with such astonishing speed. It doesn’t just connect high-performance devices. It is one in its own right.
And because Thunderbolt is based on DisplayPort technology, the video standard for high-resolution displays, any Mini DisplayPort display plugs right into the Thunderbolt port. To connect a DisplayPort, DVI, HDMI, or VGA display, just use an existing adapter.

Performance and expansion made faster and smarter.

Thunderbolt I/O technology gives you two channels on the same connector with 10 Gbps of throughput in both directions. That makes Thunderbolt ultrafast and ultraflexible. You can move data to and from peripherals up to 20 times faster than with USB 2.0 and up to 12 times faster than with FireWire 800. You also have more than enough bandwidth to daisy-chain multiple high-speed devices without using a hub or switch. For example, you can connect several high-performance external disks, a video capture device, and even a display to a single Thunderbolt chain while maintaining maximum throughput.

Thunderbolt I/O technology provides native support for the Apple Thunderbolt Display and Mini DisplayPort displays. It also supports DisplayPort, DVI, HDMI, and VGA displays through the use of existing adapters. So you can connect your Apple LED Cinema Display or other display, along with multiple high-speed devices, all from a single port.

No project is too massive.

With Thunderbolt, you’re just as likely to build a professional video setup around your MacBook Pro or iMac as your Mac Pro. If you’re a video editor, imagine using a single port to connect high-performance storage, a high-resolution display, and high-bit-rate video capture devices to handle all the post-production for a feature film. Thunderbolt I/O technology allows you to daisy-chain up to six Thunderbolt peripherals, including an Apple Thunderbolt Display and the Promise Pegasus RAID or LaCie Little Big Disk.1 You can even add an Apple LED Cinema Display to the end of the chain.

And that’s just the beginning. With Thunderbolt technology, peripheral manufacturers finally have what they need to take high-performance devices from workstations and top-of-the-line desktops to just about any computer. 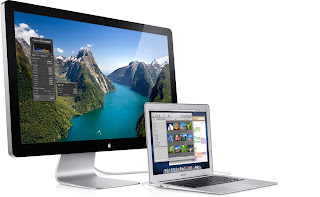 Soon you’ll be able to connect to a host of Thunderbolt-enabled devices.1 Here are just a few of the first: