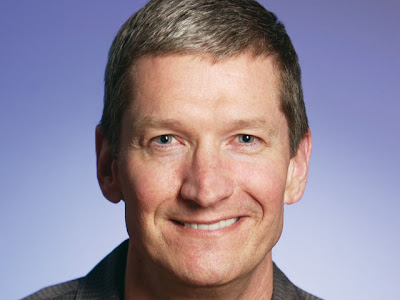 Apple's new chief executive has been awarded a million restricted shares of Apple that vest over the next decade, ensuring his continued employment through 2021.one million shares of Apple would be worth $383.6 million. However, the restricted stock units Apple's board voted to awarded Cook won't begin to vest until August 2016, when half of the award will convert into shares or a cash equivalent, depending upon how the award is set up.

The second half of Cook's million restricted stock units vest in August 2021. Both vesting dates are contingent upon his "continued employment with Apple through each such date," according to Apple's 8K filing with the SEC.

A variety of analysts have already set Apple's stock targets as high as $500, and in ten years, Apple's stock price could easily make Cook's award worth considerably more than half a billion dollars.
Posted by Toukir Rahman