Anonymous inventing its own DDos tool 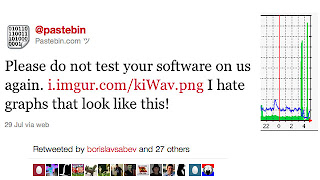 Anonymous may abandon its current DDoS tool LOIC and develop a more powerful replacement to protect hackers from detection. LOIC was effective in Operation Payback, but it's also the reason hackers have been identified and arrested.

The new tool, supposedly called #RefRef, will use Javascript and SQL to attack a target website and use the site's own processing power against it. RefRef will be platform independent so it can be used off any device that supports Javascript including mobile phones.

Anonymous reportedly tested #RefRef against PasteBin, which was not too happy with the effectiveness of the test. A 17 second test crippled the website for 42 minutes. The hacker group is supposedly gearing up to release the LOIC replacement this September.
Posted by Toukir Rahman