Adobe Systems today is expanding its efforts at putting Web design tools within reach of those who don't want to learn how to hand code.The company is introducing a new application codenamed Muse. Built on its AIR platform, Muse lets users create and publish Web sites like they would make a site mock-up in the company's InDesign or Illustrator software. Adobe promises it will simplify the process for designers who would have previously had to hand off their designs to developers to do the coding necessary to turn that mock-up into an actual site.

Adobe says part of the reason to build such a tool stemmed from a study it did that found most Web design products require users to learn code, something that could be problematic for the more than half of designers surveyed who still did mainly print work.

"What we're seeing is that the tools that have been made available for designers to be able to create digital experiences require people to learn code. And most designers either don't want to, or they're not interested--or they've learned, and it's just not the way their brain works," said Jane Brady, the senior product marketing manager of Adobe's creative suite. "What they kept telling us is that they want to be able to create a Web site or other kinds of digital content as easily as if they're working in InDesign, Illustrator, or Photoshop."

The company's solution was to grab some former InDesign engineers and put them to work on a product that would do just that, with Muse being the result. 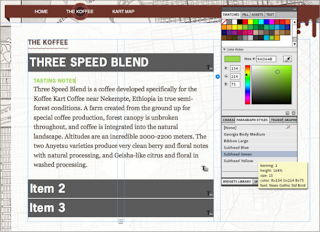 Adobe's Muse software aims to give designers a way to mock up site designs that are actual full-working Web sites.
The software (which Adobe says will get a new name when it's out of beta) lets users design a Web site using a familiar Adobe creative tool set, plugging in backgrounds, headers, footers, menus and Web widgets in a what you see is what you get (WYSIWYG) menus. Page assets like photos and image elements can then be worked on in the company's other design software including Photoshop. All the while, any code that's powering the site sits quietly behind the scenes. Designers can see how their work looks by loading it up in a built-in, Webkit-based browser, or sending it to open in a browser that's installed on their computer.

Muse is being offered up as a standalone app, and has not been designed to interact with Dreamweaver, the company's other Web design software product. It cannot, for instance, open up Dreamweaver files, or offer a way to make edits to Muse code within Dreamweaver.

"We're in an interesting world where our primary goal is to support that visual designer, but they don't live in a vacuum. There's so much going on around them, that we do need to make Muse extensible," said Danielle Beaumont, Muse's group product manager. "But a little bit like a PDF or a Postscript file, we feel like it's our job to generate fantastic code that loads very very quickly and is cutting edge, but we're not looking at generating code that a hand-coder would like to take forward and try to wrap it back into Muse."

Muse has, however, been set up to accept chunks of arbitrary HTML, and make use of Web widgets that can be embedded into pages, things like YouTube videos and Google Maps.

One thing you won't find in the initial release are templates, a mainstay of consumer-facing Web site builders, and even Adobe's own Dreamweaver site building software. "I'll be really honest--templates sometimes really insult visual designers," said Beaumont. "Examples of Web sites that [designers] might want to emulate? Sure that makes a lot of sense." What Beaumont said the company doesn't want is something where users plug in a different photo and consider their work done. Users, however, can import things like .png, .gif, animated .gif, and .flv files, along with content from the company's Edge product.

Like the reason for making the software in the first place, the ramp-up to actually build Muse centered on consumer research. Following its market research, Adobe's plan involved hosting workshops in San Francisco and Seattle to talk with designers about work flows and features. The company also tapped print-centric designers at a local San Francisco design academy, giving them early access to the software and seeking feedback on ways to improve it.

"Early on we realized that as we developed the product, we wanted input from the community. But the community we're working with isn't a Web community necessarily," Beaumont said. "These are visual designers, they're probably highly accomplished. They're not necessarily folks who play with beta software that hasn't been stabilized. They don't necessarily search the Web and go to pre-release sites and post comments in forums to figure out how to intuit a product that's being evolved."

That puts Adobe in a tight spot with the product's release since that's exactly what Muse will be during its beta phase. The company's answer to that is to offer as a free beta for the next six months in order to squash bugs and tighten up features, followed by a version 1.0 software in the first quarter of next year. Following the end of that beta period, Adobe's going to offer it as a subscription service that users pay $20 a month to use, or $15 a month if they buy a whole year at a time ($180). The company admits that the system may not be for everyone but notes that offering it as a subscription service comes with some benefits as a result.

"The way we recognize revenue, once you ship something, we can't add another feature until we add another version," Brady said. "We want to be able to add functionality, and from a product development standpoint, if we know everybody on the marketplace is on the same version, we don't need to worry about different versions--with a subscription they're always on the latest version." That's especially important given the rapid development of browsers and Web standards, Brady argued.

That strategy also continues the trend of Adobe offering its software as a subscription, something it took a big step in as part of an update to its Create Suite product line in April. One big difference in that case is that you can continue to purchase that software bundle up front. The big incentive Adobe's offering with both the subscription-based version of its Creative Suite and Muse is giving paying subscribers the most up to date version of those products.

Muse follows hot on the heels of Adobe's public preview of its Edge software. That tool lets people create animation effects for Web pages using a timeline approach, akin to a video editor, as opposed to having them hand-code everything. Like Muse, that product too is being offered up as a preview ahead of becoming a paid service next year.

Adobe has set up a website where interested parties can download the free beta, view a gallery of Muse-created websites, and access instructional tutorials. Some 40 websites designed with Muse have already been published by Adobe's pre-release community.