First revealed last October at the annual Adobe Max show in Los Angeles, Edge is a means of building web animations using standard technologies such as HTML5, CSS, and JavaScript. It's not a straight replacement for Flash – web standards aren't yet up to the task – but according to Adobe, it rivals the company's Flash Professional tool when fashioning animated web advertisements, widgets, and other similar "interactive" media.

"We see both of these technologies – Flash and HTML – coexisting, just as they always have done," Paul Gubbay, Adobe's vice president of engineering, design, and web, said. "With Flash, we're focused on the upper echelon of rich interactivity – gaming apps, rich media apps, including video, and data driven apps. But some of the things that were originally done with Flash we now see being done in HTML5 and JavaScript." 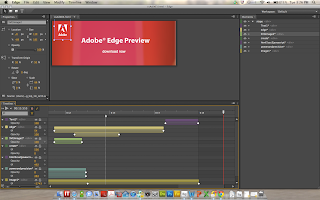 Adobe Edge in motion (click to enlarge)
Built atop the open source WebKit rendering engine, Edge is part of Adobe's ongoing effort to reposition itself in a world where Apple has banned Flash from its mobile devices and even Microsoft has put its weight behind the latest web standards. Over the past several months, Adobe has begun contributing to the WebKit project as well as the jQuery and jQuery mobile JavaScript libraries, and according to Gubbay, this is the sort of work that would have gone into the proprietary Flash platform in years past.

"What we've been doing for a long time is focusing on our runtime: Flash. And because the HTML5 ecosystem wasn't really moving, we weren't doing a lot there," Gubbay says. "But over the last couple of years, there's been a tidal wave of change [with HTML], and as a result, as we've been listening to customers, we've committed to doing more in the browser."

The company has also beefed up the HTML tools available with its Creative Suite, and now it is releasing an HTML animation tool to the public much earlier in the development process than it normally would. The Edge "public preview is available from the Adobe Labs site, and it's free of charge. Designers are encourages to provide feedback that may help shape future releases. The preview will be regularly updated."

With the tool, you can add animations to existing HTML documents or fashion animations from scratch. You can import standard web graphics, such as SVG, PNG, JPG and GIF files, and style them with CSS. The preview, Adobe says, will be regularly updated as it adds new tools... and it will remain free.
Posted by Toukir Rahman