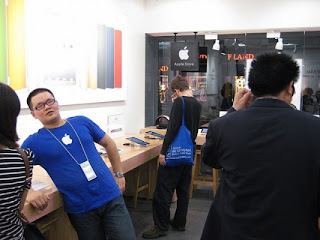 After the discovery of aChina Fake Apple Store last month, Chinese authorities have now discovered that there are a total of 22 unauthorized Apple retailers operating in the same area.


China’s Administration for Industry and Commerce in the Yunnan provincial capital said the stores have been ordered to stop using Apple’s logo after Apple China accused them of unfair competition and violating its registered trademark, state media said on Thursday.

It is thought that the products being sold in the fake Apple Stores are in fact genuine Apple products; rather than fake products. What is more likely is that the Apple products are purchased outside of China and smuggled into the country. We saw an example of how this was being done earlier in the week. This would allow the resellers to avoid paying any taxes.