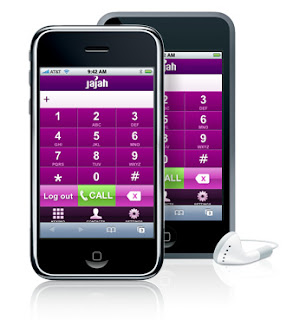 As our smartphones continue to become more “smart” and less “phone,” we all still need to make calls sometimes. However, the carriers’ rates for voice minutes can be a little overwhelming (especially when added to data and texting plans). With today’s data speeds, VoIP is a legit option for many people who want to avoid forking over heavy loads of cash. In addition, those with an iPod touch or iPad who would like to make calls can use these as well. These are our top choices.

For those new to this: VoIP stands for Voice over Internet Protocol. It simply describes methods of making voice calls over an internet connection. It’s a data-only phone call. On our mobile devices, that means using WiFi or your smartphone’s data plan to make and receive voice calls (i.e., no voice minutes).
VoIP is generally only going to be an option for those with a solid data connection. Of course any decent WiFi connection should be fine. While your cellular data connection doesn’t have to be 4G (not an option on iOS anyway), using anything less than 3G isn’t recommended.
Also, those with connections that frequently drop in/out may have problems with VoIP. For those users, we would only advise going this route when connected to WiFi.
There are many options, so we’ve narrowed it down to the two that stand head and shoulders above the crowd. 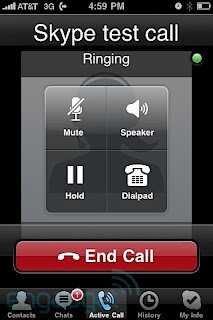 Skype has become so synonymous with VoIP that it’s almost become like Kleenex is to tissues – people use the brand name to describe the general product. Fortunately for us, their service lives up to the billing. It’s high-quality, simple to use, and very reasonably priced.
The Skype app for iOS does everything Skype on a desktop does. It can make calls over both WiFi and 3G. While video chat and instant messaging aren’t our focus here, Skype’s app offers those as well.

If you’re only going to call other Skype users, the service is free. To get the full VoIP experience, though, you will want to sign up for a SkypeOut calling plan. This lets you call any number in your country. That will run a very modest $2.99 per month for unlimited calls in the US/Canada.
You may also want to get your own phone number, so your non-Skype-using friends can get in touch with you. That price can vary. Normally it is another $60 per year, or $18 for three months. But if you first subscribe to a SkypeOut plan – then you can get a discount that drops it down to $30 a year, or $12 for three months. In order to get the discount, however, you must sign up for the SkypeOut plan before signing up for the online number.
Overall, depending how you pay, it will add up to around $5-6 per month for your own phone number and the ability to call any phone.

If your connection is good, voice quality on Skype-to-Skype calls is extremely crisp and clear. It is superior to most landlines, and often sounds as if you are in the same room with the person.
Skype-to-landlines or Skype-to cellphones is still solid, though not nearly as high-quality as Skype-to-Skype. It usually has some very slight latency (delay between you and the person you are talking to), which is something to watch out for with any VoIP provider.

Previously, the biggest drawback to using Skype on iOS was having to wait for important updates. The company is notorious for taking a long time to deliver important new features that they have promised.
Calling over 3G, iOS 4 multitasking functionality, video calling… all were major updates that Skype dragged their feet on bringing to iOS. Many customers were disgruntled and annoyed while they waited for Skype to finally bring these features to the table.
Thankfully, the list of those important updates has been mostly exhausted, so that gripe may not be so relevant anymore. iPad users are still waiting for their version of the app, but at least the iPhone version can be scaled up and run on the iPad (jailbreakers can even use RetinaPad for much sharper scaling).
Many have also been aggravated with their customer support. Until recently, the only way to get in touch was through Skype’s forums, though they have finally added email support. We contacted them recently, and (despite being handed off from agent-to-agent and having to re-explain the problem several times) the responses were lightning-fast and they ultimately cleared things up.

Skype lives up to their reputation and offers a quality, affordable package. The two biggest drawbacks – updates and customer support – shouldn’t be as much of an issue now as they once were. It is easily one of the two most highly-recommended VoIP apps on iOS.


Talkatone - free calls and text via WiFi or 3G 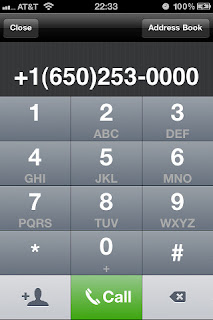 Many people make the mistake of thinking that Google Voice is a direct competitor to Skype. But Google Voice is not VoIP. It probably will be at some point, but right now it isn’t. Presently, GV uses callbacks and forwarding to let you use a “cloud” number on any number of existing phone lines. This opens the doors to all kinds of fun tricks and work-arounds for the tech-savvy (some of which do involve VoIP) but GV is very different from Skype.
However, the calling that Google offers in Gmail is VoIP. Talkatone, while not directly associated with Google in any way, uses Gmail VoIP calling to let you make free calls on your iPhone, iPod touch, or iPad. As long as you have a Google Voice account, you can use Talkatone to make free calls. It works over both WiFi and 3G, and you can both place and receive calls. It doesn’t use a single voice minute.
So there must be some complicated setup involving routing your number through seven servers and forwarding it to your uncle’s Commodore 64 in order to work, right? Nope – it’s as simple as pie to set up. The app walks you through everything you need to know the first time you use it. All you do is enter your Google Voice account info, set your GV line up to forward to Google Chat, and you’re set.
Talkatone also has Google Voice texting built into the app, but our testing found it to be clunky, awkward, and not recommended for SMS over the official Google Voice app.

If you’ve ever used Gmail calling, that’s exactly the quality you’ll be getting here. Calling other users on Gmail (or friends who are also setup through this app) will give you the clearest calls. Standard calls to phone numbers are “good enough,” but nothing stellar. While Skype’s quality doesn’t excel in that area either, they do have a small lead over Talkatone in that department.

There is also a premium option for those who want access to multiple accounts. The premium service also gives you an option that allows for a higher-quality compression rate. We tested that compression method, though, and it doesn’t make enough of a difference for us to recommend. The premium account is available as an in-app purchase for $2/month or $20/year.

Is there any reason not to use Talkatone? If you want to pay as little as possible, you can’t do any better than free.
The biggest catch here is that the “free” part will only apply through the end of 2011. That expiration has nothing to do with the developers of this app though. The Gmail calling that this app is using is only going to be free until New Years’ Eve. Google announced that earlier this year. After that, you’ll have to pay up to Google or go with another option.
Also, for those who don’t mind shelling out a few bucks a month right now, Skype does have slightly better quality and less lag than Talkatone (it isn’t bad with either service though). Skype also has video chat, so it may be convenient for some people to initiate their voice and video calls from the same app.
Unlike Skype, the Talkatone app does have iAds that display on the screen. While they aren’t extremely intrusive, this is how the developer is making his money. If you like a 100% ad-free experience, that could be another reason to go with Skype.

If you don’t mind getting something for free that you’ll eventually have to start paying for, this may be the best way to go. The quality is almost equal with Skype and you don’t have to pay a dime in 2011.

We believe that Skype and Talkatone offer all of the quality, functionality, and value that you need. But if you’re a stickler for options and want to investigate the playing field further, here are some other VoIP apps: 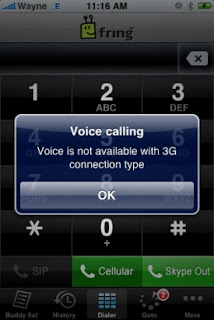 One of the companies that is most obviously trying to compete with Skype is Fring. Instead of offering unlimited calling plans like Skype, Fring charges on a per-minute basis. Calls to the US are just under a penny a minute. Fring doesn’t offer a phone number.
In addition to offering their own service, Fring also serves as a solid SIP client. An SIP provider is essentially a provider of VoIP service that you can use with a variety of applications. Fring is one (of many) of those applications. If you do go the SIP route, we highly recommend Sipgate for both pricing and quality.
While a VoIP app’s interface could seem trivial to some, Fring has an odd, puke-colored UI that isn’t helping things. Also its ringtone sounds like a Sesame Street DJ scratching a recording of a phone ringing. It could use some work.
It’s a solid choice, but we’re hard-pressed for reasons to recommend it to anyone over Skype or Talkatone. 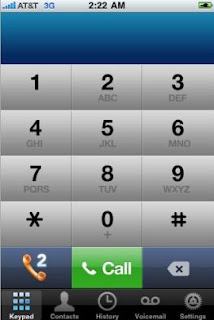 While Toktumi’s Line2 app offers pretty much the same features as the other services do, they do add a few extra perks and market it in a completely different way.
Line2 touts that it’s an option for those with shoddy connections (AT&T in big cities) who want a second line on their phone. One of their unique features is the handing-off of calls from WiFi to 3G. So if you’re in a call at the office (on WiFi) and you’re on your way out, it will switch to 3G without dropping the call. This could be handy for lots of people.
Line2 also offers free unlimited text messaging. The number that they issue for you (you can choose the area code) will be the same for calls and texts. Of course Talkatone will offer the same thing, as you can easily text from your Google Voice number.
The biggest drawback to this otherwise phenomenal provider is the cost. At $10 per month, it’s about $48 per year more than Skype, and $120 a year more than Talkatone. If you really want the call hand-offs and texting, this could be worthwhile. Otherwise, we don’t see its being worth the extra dough.


If you need more information and application please request in comment.