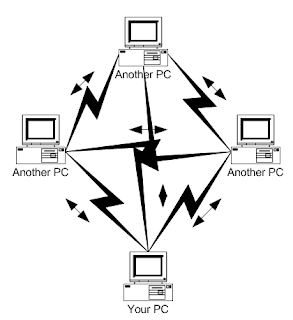 Users can use software that connects in to a peer-to-peer network to search for shared files on the computers of other users (i.e. peers) connected to the network. Files of interest can then be downloaded directly from other users on the network. Typically, large files are broken down into smaller chunks, which may be obtained from multiple peers and then reassembled by the downloader. This is done while the peer is simultaneously uploading the chunks it already has to other peers.

Due to the vastness of the p2p landscape,  searching for the most efficient file sharing app as dictated by your needs and preferences can prove tiresome – that’s why we thought we should make this task easier for you by listing 20 of the best peer-to-peer programs currently in use.

Considering the vast psp softwares availabe, searching for the most efficient file sharing apps can be tiresome, most espcially with the increase of malware, viruses and spywares - for that reason i though it would be good to make this task easier for you by collating the best peep to peer file sharing softwares.

Note: Make sure you know what you are downloading, coz most software disguises as being genuine whereas they are habouring viruses and some hackers uses this medium to penetrate into your system.

So be careful and good luck.

The program is designed to use minimal computer resources while offering functionality comparable to larger BitTorrent clients such as Vuze or BitComet.

Soulseek is a peer-to-peer (P2P) file-sharing network and application. It is used mostly to exchange music, although users are able to share a variety of files. It was created by Nir Arbel, a former Napster programmer. The server used is composed of two networks since 2006. Since 6 July 2008, there has been an attempt to merge them with the arrival of a new stable release.

DC++ is a free and open-source, peer-to-peer file sharing client alternative to the original client, NeoModus Direct Connect (NMDC); it connects to the same file-sharing network and supports the same file-sharing protocol. One of the reasons commonly attributed to the aforementioned popularity of DC++ is that it has no adware of any kind, unlike NMDC.

Vuze (previously Azureus) is a BitTorrent client used to transfer files via the BitTorrent protocol. Vuze is written in Java, and uses the Azureus Engine. In addition to downloading data linked to by .torrent files, Azureus allows users to view, publish and share original DVD and HD quality video content.

Content is presented through channels and categories containing TV shows, music videos, movies, video games and others. Additionally, if users prefer to publish their original content, they may earn money from it.

LimeWire is a free peer-to-peer file sharing (P2P) client program that runs on Windows, Mac OS X, Linux, and other operating systems supported by the Java software platform. LimeWire uses the gnutella network as well as the BitTorrent protocol. A free software version and a purchasable "enhanced" version are available.

eMule is a free peer-to-peer file sharing application for Microsoft Windows. Started in May 2002 as an alternative to eDonkey2000, eMule now connects to both the eDonkey network and the Kad network.

The distinguishing features of eMule are the direct exchange of sources between client nodes, fast recovery of corrupted downloads, and the use of a credit system to reward frequent uploaders. Furthermore, eMule transmits data in zlib-compressed form to save bandwidth.

One unique thing about Shareaza is that it hashes its files for all networks, and then distributes those hash values on G2 which then allows it to download one file from several networks at once. When another Shareaza client connected to G2 finds such a file, it is given the hash values for all networks and can search on the other networks with their respective hash values, which increases the number of sources and the download speed of the file. Shareaza also uses its G2 network to find more sources for torrents.

The BitComet program is a multi-threaded multi-protocol hybrid download manager and BitTorrent Peer-to-peer (P2P) file-sharing application. It supports simultaneous download tasks. To complete a particular download, it can draw parts of files from many sources across different P2P and client–server protocols.

aMule is a free peer-to-peer file sharing application that works with the EDonkey network and the Kad Network, offering similar features to eMule and adding others such as GeoIP (country flags). It was forked from the xMule source code on August 18, 2003, which itself is a fork of the lMule project, which was the first attempt to bring the eMule client to Linux.

giFT is a collection of various software components geared towards improving the overall usability of a multitude of peer-to-peer file-sharing networks. This goal is accomplished by unifying the components such that a user of the software may choose any of the available interfaces to access any of the available networks. The central application, giftd, uses a plugin-based architecture capable of using multiple networks simultaneously through a single user interface.

Ares Galaxy is an open source peer-to-peer file sharing application that uses its own decentralized supernode/leaf network. It was spun off from the gnutella network in 2002, and is currently hosted on SourceForge.net. Ares Galaxy has a simple, quick access interface with a built in audio/video viewer. The latest versions also support the BitTorrent protocol and Shoutcast radio stations.

ANts P2P is an anonymous peer-to-peer open source file sharing software written in Java. The software was initially conceived in 2003 to explore the potentials offered by a number of novel routing protocols (ARA, ants-based routing, MANET routing protocols) based on swarm intelligence. A report (in Italian) about the initial phases of the project can be downloaded from the software website. A short summary in english is available on the ANts P2P website.

BitTornado is a free BitTorrent client for transfer of computer files over networks, including the Internet. It is developed by John Hoffman, who also created its predecessor, Shad0w's Experimental Client. Based on the original BitTorrent client, the interface is largely the same, with added features such as

FrostWire is a Peer-to-Peer file sharing program for the Gnutella network and BitTorrent protocol. It is built on the LimeWire source code, and it is written in the Java programming language. Development of the program has been active since the program was first released in September 2004.

Since LimeWire was closed down on 26th October 2010, LimeWire was put under a court injunction to stop them from distributing the software and developing it, FrostWire has become increasingly popular as it is almost identical to LimeWire 4.x series and has the same features.

Morpheus was a file sharing and searching peer-to-peer client for Microsoft Windows, developed and distributed by the company StreamCast, that originally used the Opennap protocol, but later supported many different peer-to-peer protocols.

On April 22, 2008, distributor StreamCast Networks filed for Chapter 7 bankruptcy after a long legal battle with music companies; all of their employees were laid off and the official download at www.morpheus.com stopped being available, though for a small period the website remained online. As of October 29, 2008 the official Morpheus website is offline, including all other websites owned by StreamCast Networks including Morpheus.com, MusicCity.com, Streamcastnetworks.com and NeoNetwork.com

Gtk-gnutella is programmed in C with an emphasis on efficiency and portability without being minimalistic but rather head-on with most of the modern features of the gnutella network. Therefore, it requires less resources (such as CPU and/or RAM) than the major gnutella clients. It can also be used as headless gnutella client not requiring Gtk+ at all.

gtk-gnutella has a filtering engine that can reduce the amount of spam and other irrelevant results. gtk-gnutella supports a large range of the features of modern gnutella clients. gtk-gnutella was the first gnutella client to support IPv6 and encryption using TLS. It can handle and export magnet links. It has strong internationalization features, supporting English, German, Greek, French, Hungarian, Spanish, Japanese, Norwegian, Dutch and Chinese. gtk-gnutella also has support to prevent spamming and other hostile peer activity.

Acquisition is a Gnutella-based peer-to-peer client that is also capable of supporting BitTorrent designed specifically for Mac OS X. It is based on LimeWire and is a shareware product, priced from $25. Acquisition is more noted for its focus on user interface and integration with Mac OS X than for its originality in features, making full use of Apple's Cocoa APIs, and has integration with iTunes.

Cabos is a free gnutella file sharing program. It is based on LimeWire's source code, and has a similar feel in terms of interface. However, it lacks the chat and library features found in LimeWire. Also, while LimeWire is completely written in Java, the GUI of Cabos is written in REALbasic

MLDonkey is an open source, multi-protocol, peer-to-peer file sharing application that runs as a back-end server application on many platforms. It can be controlled through a user interface provided by one of many separate front-ends, including a Web interface, telnet interface and over a dozen native client programs.

Originally a Linux client for the eDonkey protocol, it now runs on many flavors of Unix-like, Mac OS X, Windows and MorphOS and supports numerous peer-to-peer protocols.

KTorrent is a bittorrent application for KDE which allows you to download files using the BitTorrent protocol. It enables you to run multiple torrents at the same time and comes with extended features to make it a full-featured client for BitTorrent.
Posted by Toukir Rahman