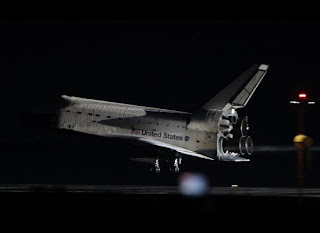 Atlantis and four astronauts returned from the International Space Station in triumph Thursday, bringing an end to NASA's 30-year shuttle journey with one last, rousing touchdown that drew cheers and tears.
A record crowd of 2,000 gathered near the landing strip, thousands more packed the space center and countless others watched history unfold from afar as NASA's longest-running spaceflight program came to a close.
"After serving the world for over 30 years, the space shuttle's earned its place in history. And it's come to a final stop," radioed commander Christopher Ferguson.
"Job well done, America," replied Mission Control.
The twilight landing, just before dawn, came 30 years and three months after the very first shuttle flight in 1981. It will be another three to five years at best before Americans are launched again from U.S. soil, with private companies gearing up to seize the Earth-to-orbit-and-back baton from NASA.
The long-term future for American space exploration is just as hazy, a huge concern for many at NASA and all those losing their jobs because of the shuttle's end. Asteroids and Mars are the destinations of choice, yet NASA has yet to settle on a rocket design to get astronauts there.
Thursday, though, belonged to Atlantis and its crew: Ferguson, co-pilot Douglas Hurley, Rex Walheim and Sandra Magnus, who completed a successful space station resupply mission.

Advertisement
Atlantis' main landing gears touched down at 5:57 a.m., with "wheels stop" less than a minute later.
"The space shuttle has changed the way we view the world and it's changed the way we view our universe," said Ferguson. "There's a lot of emotion today, but one thing's indisputable. America's not going to stop exploring.
"Thank you Columbia, Challenger, Discovery, Endeavour and our ship Atlantis. Thank you for protecting us and bringing this program to such a fitting end."
The astronauts' families and friends, as well as shuttle managers and NASA brass, gathered near the runway to welcome Atlantis home - and bid the shuttle program goodbye. Mission Control in Houston also was packed, teeming with past and present flight directors. Hundreds of other Johnson Space Center employees stood outside, watching the landing on a jumbo screen.
NASA's five space shuttles launched, saved and revitalized the Hubble Space Telescope; built the space station, the world's largest orbiting structure; and opened the final frontier to women, minorities, schoolteachers, even a prince. The first American to orbit the Earth, John Glenn, became the oldest person ever in space, thanks to the shuttle. He was 77 at the time; he turned 90 this week.
Born with Columbia, it was NASA's longest-running space exploration program.
It was truly a homecoming for Atlantis, which first soared in 1985. The next-to-youngest in NASA's fleet will remain at Kennedy Space Center as a museum display.
This grand finale came 50 years to the day that Gus Grissom became the second American in space, just a half-year ahead of Glenn.
Atlantis - the last of NASA's three surviving shuttles to retire - performed as admirably during descent as it did throughout the 13-day flight. A full year's worth of food and other supplies were dropped off at the space station, just in case the upcoming commercial deliveries get delayed. The international partners - Russia, Europe, Japan - will carry the load in the meantime.
It was the 135th mission for the space shuttle fleet, which altogether flew 542 million miles and circled Earth more than 21,150 times over the past three decades. The five shuttles carried 355 people from 16 countries and, altogether, spent 1,333 days in space - almost four years.
Two of the shuttles - Challenger and Columbia - were destroyed, one at launch, the other during the ride home. Fourteen lives were lost. Yet each time, the shuttle program persevered and came back to fly again.
The decision to cease shuttle flight was made seven years ago, barely a year after the Columbia tragedy. President Barack Obama nixed President George W. Bush's lunar goals, however, opting instead for astronaut expeditions to an asteroid and Mars.
Last-ditch appeals to keep shuttles flying by such NASA legends as Apollo 11's Neil Armstrong and Mission Control founder Christopher Kraft landed flat.
It comes down to money.
NASA is sacrificing the shuttles, according to the program manager, so it can get out of low-Earth orbit and get to points beyond. The first stop under Obama's plan is an asteroid by 2025; next comes Mars in the mid-2030s.
Private companies have been tapped to take over cargo hauls and astronaut rides to the space station, which is expected to carry on for at least another decade. The first commercial supply run is expected late this year, with Space Exploration Technologies Corp. launching its own rocket and spacecraft from Cape Canaveral.
None of these private spacecraft, however, will have the hauling capability of NASA's shuttles; their payload bays stretch 60 feet long and 15 feet across, and hoisted megaton observatories like Hubble. Much of the nearly 1 million pounds of space station was carried to orbit by space shuttles.
Astronaut trips by the commercial competitors will take years to achieve.
SpaceX maintains it can get people to the space station within three years of getting the all-clear from NASA. Station managers expect it to be more like five years. Some skeptics say it could be 10 years before Americans are launched again from U.S. soil.
An American flag that flew on the first shuttle flight and returned to orbit aboard Atlantis on July 8, is now at the space station. The first company to get astronauts there will claim the flag as a prize.
Until then, NASA astronauts will continue to hitch rides to the space station on Russian Soyuz spacecraft - for tens of millions of dollars per seat.
Ever since snagging this plum assignment last year, Ferguson and his crew have tried to stay upbeat - focusing on the 30 years of success. They pointed to the delivery and repair of Hubble - one of 180 satellites and other spacecraft launched from the shuttles - and the completion of the space station, more than 12 years and 37 shuttle flights in the making.
But with thousands of layoffs coming as early as Friday - on top of thousands of shuttle jobs already lost - even Atlantis' determinedly optimistic crew found it difficult at times to put on happy faces.
Local businesses and communities chimed in, hoping to ease the pain.
"Thank you shuttle workers," read the sign outside Cape Canaveral City Hall.
After months of decommissioning, Atlantis will be placed on public display at the Kennedy Space Center Visitors Complex. Discovery, the first to retire in March, will head to a Smithsonian hangar in Virginia. Endeavour, which returned from the space station on June 1, will go to the California Science Center in Los Angeles.


Here is the video :