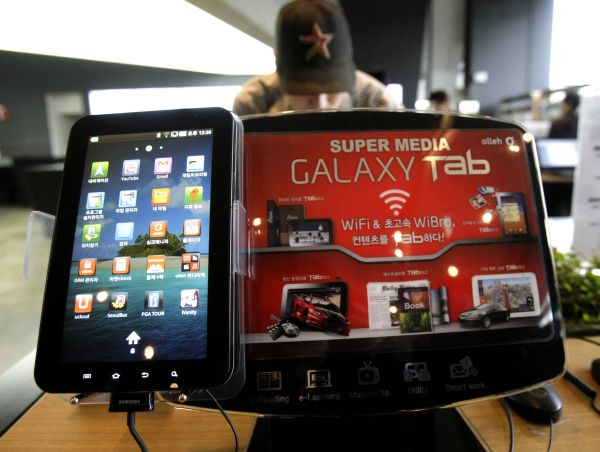 TAKING ACTION: The Galaxy Tab (left) on display at the Samsung headquarters in Seoul, South Korea. Samsung has filed a complaint with the US International Trade Commission over what it claims are Apple's violation of five patents held by Samsung

SEOUL: Samsung Electronics is asking the United States to prohibit Apple from importing key products including the latest iPhone and iPad devices amid an escalating patent dispute.
Samsung filed a complaint with the US International Trade Commission over what it claims are Apple's violation of five patents held by Samsung, the Suwon, South Korea-based company said on Thursday. The complaint was filed on Wednesday.
"The complaint requests relief in the form of a permanent exclusion order prohibiting entry to the United States of all Apple products in violation of these patents," Samsung said in a statement, adding that the items include the iPhone 4, iPad 2 and iPod touch.
Though Apple is a US company, many of its products are assembled in China and exported to the United States.
Apple Inc spokesman Steve Park in Seoul declined comment on the complaint.
Consumers shouldn't worry about being able to buy products. These disputes take months or years to resolve and typically end with payments of licensing fees rather than any import ban.
On June 14, Apple agreed to pay Nokia Corp a one-time sum to settle their long-standing disputes over patents that cover features such as swiping gestures on touchscreens and the built-in "app store" for downloading updated programs. The amount wasn't disclosed.
The action by Samsung is the latest move in a fight that began in April when Cupertino, California-based Apple Inc sued Samsung Electronics Co in a California court claiming that Samsung's Galaxy line of smartphones and Tablet computers copy its iPad and iPhone.
Flurry of suits
Samsung responded by filing lawsuits in South Korea, the United States and elsewhere alleging patent violations by Apple. Apple then came back last week and filed a lawsuit against Samsung in Seoul Central District Court, taking the battle to the South Korean company's home turf.
Other companies are involved in similar disputes. Apple has sued Taiwan's HTC Corp, one of the leading producers of phones that run on Google Inc's Android software, a potential challenger to Apple's popular iPhone. Microsoft Corp has sued Motorola over Android phones, too.
The disputes highlight the growth of so-called smart devices such as phones and Tablets and the intense competition for customers amid the products' soaring popularity spurred by Apple's 2007 launch of the iPhone.
Samsung, the world's second-largest manufacturer of mobile phones, got a slower start in smartphones but has been catching up with its Galaxy brand.
Samsung and Apple are not only competitors. Apple, driven by the success of the iPhone and iPad, become the world's largest buyer of chips for computers and phones last year, according to research firm IHS iSuppli.
Samsung, the world's biggest manufacturer of memory chips, declined to say exactly how much it sells to Apple.
"Apple is our competitor, but at the same time it is one of our biggest customers," Samsung spokesman Nam Ki-yung said. "And we can't discuss our customers."
The International Trade Commission is an independent US federal agency that deals with issues that affect trade including dumping, subsidies and safeguards and also judges import cases dealing with intellectual property rights, according to its website.
The commission can order imports of products made with contested technology to be blocked. Disputes are typically resolved in 12 to 18 months.
"We hope the ITC makes a decision as soon as possible," Samsung's Nam said. - AP
Posted by Toukir Rahman