0 apple, Computer Tips/Tricks, ipad 11:21 PM
Recently, my iPad began exhibiting a weird audio quirk. For the most part, the iPad’s sound was gone. In a few apps, I could hear the audio. For example, I could play instruments in GarageBand. And if I went to General -> Sound in Settings, the Ringer and Alerts sound would play. But in almost all other apps, the sound was either absent or played for a second or two and then stopped. 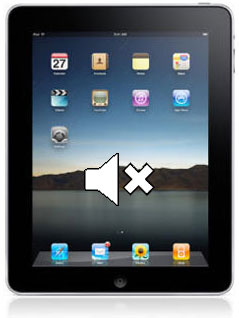 Using the Volume Up button on the side of the iPad, I pushed the sound all the way to its maximum level. It had no effect. The sound was still absent in all the places where it had been missing.
Overall, this was very much how the iPad behaves when it is set to Mute. However, I had not set the iPad to Mute—at least not recently. In fact, the Side Switch was currently set to work as Lock Rotation, not Mute—as configured in the “Use Side Switch to” section of the iPad’s General Settings.
The fix turns out to be easy (and a bit embarrassing). I had indeed inadvertently set the Side Switch to mute the iPad prior to the last time I had enabled Lock Rotation mode. This left the iPad in Mute mode without a physical switch or button that could undo the setting. This was what had me scratching my head. I had done this weeks ago, but only noticed it now. (I guess I was not doing anything that required sound all that time.)
To get the sound back, I simply had to reselect Mute from Settings and make sure the side switch was in the un-mute position. Sound restored! Now I could set the side switch back to Position Lock without losing any sound. The Volume Down button would work to mute the iPad, as needed.
Posted by Toukir Rahman