0 microsoft, Microsoft windows 8, News And Information, WIndows 8, windows news 6:26 PM
Windows 8 is beginning to take shape. At a developer conference at the start of June, Microsoft CEO Steve Ballmer showed off some of the features that will be included in the next version of Windows. It’s not due for release until next year, but we’ve now got a pretty good idea of what to expect from what may prove to be the last ever Windows operating system.
Both Apple CEO Steve Jobs and former Microsoft big-wig Ray Ozzie have said that we are entering a 'post-PC' world. So the challenge for Windows 8 is to prove that desktop computing as we know it is not consigned to history.
We’re far from sure that Windows as we know it is done with yet, but the details we’ve seen so far suggest Microsoft has rethought how we interact with technology in a far more substantial way than ever before. Software will be written in programming languages more applicable to the web, while Explorer menus and even windows themselves look set to be shown the door. Not everything will be radically different, of course, but there’s enough that is to pique even the anti-Microsoft brigade’s interest.
Here, we look at some of those features in detail, outline what we’d like to see in Windows 8, and report on what’s still missing.
We also take a look at the alternatives to Windows, from Apple’s brand-new OS X 10.7 Lion to the most user-friendly version of Linux to date, and the OS that perhaps offers the clearest indication of where desktop computing is heading, Google’s Chrome OS.

For more than 20 years, Microsoft has defined the computing landscape for more than a billion customers around the world. This was the bold claim of Microsoft’s corporate vice-president, Mike Angiulo, speaking at the Computex tradeshow in Taipei this June.
Along with Ballmer, Angiulo has been showing off the latest builds of Windows 8, Microsoft’s next desktop OS. It’s not that long since Windows 7 went onsale, but Windows 8 is set to debut in mid-2012 as a radically different-looking proposition. In fact, it will be perhaps the most radical overhaul since the fabled Windows 95 launch that catapulted Windows into the desktop OS stratosphere.
With all those customers at stake, Microsoft has its work cut out to please more than it irks with its new approach to desktop computing and in persuading us to upgrade from our existing Windows versions. 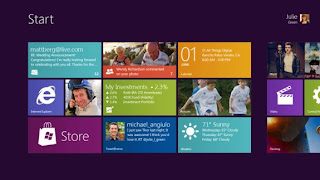 Maybe it's too much to ask for a code-once deploy-everywhere future. But a code-once, do some minor tweaking to port to every platform future? If Google and Microsoft can get their payment systems and app stores in order, it's hard to see how any other app platform could compete with their combined might. Economics alone could drive coders into an inherently cloud-centric development environment built on open standards.
Does this mean the death of native apps? No—but it does mean the rise of an entirely new species, an adaptable and hardy breed that can live anywhere, and is at home in the OS as it is in the browser.
As Microsoft developer Andres Aguiar put it:


If Microsoft is successful, it would end up killing native development for Android and iOS, because it could force Apple and Google to come up with similar solutions. They won't own their developer platform as they used to, but at least nobody will own it.

To which I'd add, Google pioneered this "solution," in the form of a Web app store. Apple, meanwhile, won't budge until it's forced to.

If you are interested you can view the newest video of the Windows 8 interface in action.