Home » apple » Macbook Air » Macbook Pro » MacBook Air Vs. MacBook Pro Which One You Like ?

MacBook Air Vs. MacBook Pro Which One You Like ? 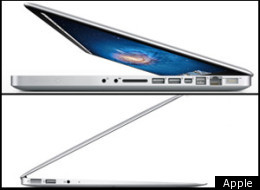 So you've decided to get a new Mac laptop. You're a die-hard Apple fan, or you're frustrated with Windows, or you just want to look hip at your local non-corporate coffee shop. You've got a nice chunk of disposable income -- between $1,000 and $1,700, say -- and you're committed to disposing of that income on one of the new Apple laptop designs.
And so you wonder: Should I choose the pretty-new MacBook Pro, updated in late February 2011, or the brand spanking new MacBook Air, updated in July 2011?
Let's start by talking about expectations. Generally, you can think about the MacBook Air as a less expensive, lighter, less powerful MacBook Pro. Or, you can think about the MacBook Pro as a more expensive, heavier, more powerful MacBook Air. That's oversimplifying it by a lot, but it basically holds across the board. Which one you choose is going to boil down to what you need your laptop to do and how much money you're willing to spend. And, hey! We've broken down the major differences between the Air and the Pro below, in simple question-and-answer format.
And so, ask yourself these questions when choosing between an Air and a Pro. Do you need your new MacTop to...
...Save You Money In The Short Term?: Even if you get the most expensive, pimped-out Frankenstein of a MacBook Air that you can, you're still not going to be paying much more than you would for the cheapest Pro. Simply, the Air costs less money than the Pro. There are two versions of the new Air: an 11-inch model that starts at $999, and a 13-inch model that starts at $1,299. Meanwhile, there are 3 versions of the Pro, a 13-incher, a 15-incher, and a 17-incher, that start at $1,199, $1,799 and $2,499, respectively. Unless you want a 13-inch Pro (and you might!), the Air is the way to go on short-term expenditure alone.
...Save You Money In The Long Term?: I asked former Apple employee and current certified Apple consultant Amanda Razzano of the How Lounge Mac Training Center in SoHo about the differences between Airs and Pros, and she surprised me when she said that buying the Pro might save you money in the long term. The Pro's faster internal processor, she said, "comes into play down the road," as it is able to handle major software updates with much more ease than the less powerful Air. Though Apple assures us that physical durability is not an issue with its super-thin Air, the durability and relevance of its "brain" just might be.
...Travel With You Everywhere?
Let's say you're a business traveler. Or you're a rising college freshman (congratulations! Take me with you.) who wants to take notes on his computer. Or maybe you just like sitting at the coffee shop pretending to type a screenplay. Well, the MacBook Air makes its cousin Pro look like it's been eating nothing but fudge since it came out five months ago. While the Air weighs somewhere between 2.5 and 3 pounds, depending on screen size, the lightest MacBook Pro weighs 4.5 pounds. And if you go for the high-end MacBook Pro, you might as well ditch the laptop sleeve for a bowling ball bag, because that thing weighs 6.5 pounds. If you plan on lugging your laptop around, the MacBook Air boasts an incredible lightness for being a laptop that the Pro (and almost all other laptops) just can't match.
Posted by Toukir Rahman