0 apple, Mac, Mac OS x Lion 11:27 PM
Now that Apple has released to developers the golden master of Lion (Mac OS X 10.7)—typically the final non-public version before the official release—speculation is mounting as to when the next major version of OS X will hit the street. But the golden master signifies something more important on a practical level: It’s time to start getting our Macs ready for Lion.
Apple is advertising Lion as the easiest-to-install version of OS X yet, and that may be true. But there are still a few things you can do right now to ensure that your Mac is ready for 10.7 when the update finally arrives.

To install Lion, you need a Mac with a minimum of 2GB of RAM and one of the following Intel processors: Intel Core 2 Duo, i3, i5, i7, or Xeon—early Intel-based Macs with Core Solo or Core Duo processors aren’t eligible. You can determine your Mac's processor and the amount of installed RAM by choosing About This Mac from the Apple menu and looking at the Processor and Memory lines, respectively. 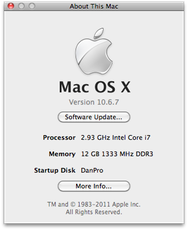 You can check your Mac's specs using the About This Mac window.
The list of Lion-eligible Macs includes most models released since late 2006. However, Macs with 4GB or more of RAM will surely run Lion better than those with only 2GB, so if your Mac currently has less than 4GB, I recommend upgrading to at least that much—and ideally even more, as you’ll see benefits in many computing tasks. A word of advice here: If you don’t buy your RAM directly from Apple, be sure you get RAM that’s specifically designed for use in Macs. Some third-party RAM that’s not up to Apple’s specs will cause problems when you upgrade your OS. Most reputable vendors will make it clear which RAM they offer is made specifically for Macs.
It’s also a good idea to have at least 10GB (and preferably more) of free space on your startup drive. The Lion installer itself is almost 4GB, plus you need some room for temporary files. In addition, some of Lion’s new features mean you’ll need more “everyday” free space than you did under Snow Leopard. (If you need to free up some space, utilities such as WhatSize and GrandPerspective can help you figure out what’s filling up your drive.)
Apple’s system requirements also state that “Some features may have additional system requirements.” We’re assuming Apple is referring to graphics cards, as some graphics-heavy features require more horsepower than the oldest Lion-compatible Macs provide. We’ll update this article with specific details as they become available, but it’s safe to say that the better your graphics card and the more dedicated memory it has, the better Lion will perform.
Finally, there’s also a software requirement for installing Lion: Your Mac must be running Snow Leopard (Mac OS X 10.6) v10.6.6 or later. The main reason for this requirement is that Lion will be available only via the Mac App Store, and the Mac App Store debuted in Mac OS X 10.6.6. In addition, Apple recommends that you have the very latest version of Snow Leopard before installing Lion, so be sure to check Software Update for any available updates (see “Pre-install checks,” below).
(If your Mac is running Leopard [Mac OS X 10.5], stay tuned—our upcoming feature on installing Lion will cover ways to install 10.7 over Leopard, assuming you have the right to do so.)
As an aside, although you can use any traditional input device with Lion, Lion’s new systemwide gesture support makes a trackpad very, very useful. If you’ve got a desktop Mac without a trackpad, you should consider splurging on Apple’s Magic Trackpad (). I personally prefer a mouse or large trackball for everyday “mousing,” but I’ve added a Magic Trackpad to my setup just to take advantage of Lion’s gesture-based features. (On that topic, you can also get a head start on acclimating yourself to Lion's new scrolling.)

While Apple portrays the process of upgrading to Lion as a simple “download and install,” those of us who’ve been around the block a few times know that a major OS update is never that simple. Perform these tasks before the upgrade and your chances of a pain-free experience will increase substantially.
Make sure your Mac’s startup drive is in good health: To do so, open Disk Utility (in /Applications/Utilities), select your startup drive, click the First Aid tab, and then click Verify. If Disk Utility finds problems, you’ll need to boot from a different volume to perform the actual repairs using the Repair Disk button. If you’ve got access to either your Snow Leopard Install DVD or the OS X install DVD or thumb drive that shipped with your Mac, you can use that. Alternatively, once Lion is released, you can create a bootable Lion installer volume—stay tuned for those instructions—and boot from it, as the installer includes Disk Utility. If you’re feeling especially cautious, you can also opt to run Apple Hardware Test. 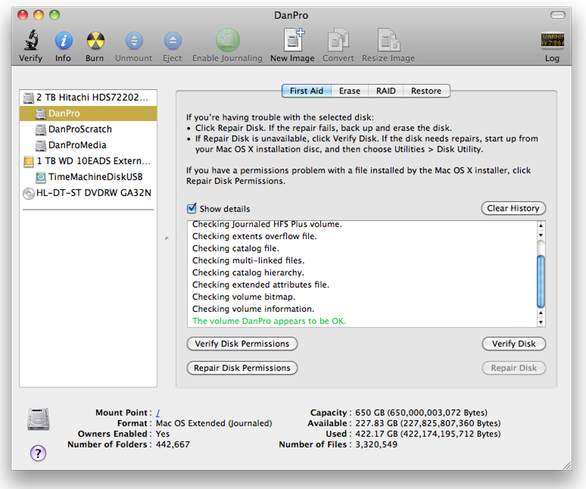 Disk Utility can verify that your Mac's drive is healthy.
Back up your Mac, and test that backup: Let me say that again: Back up your Mac, and test that backup, before installing Lion.I personally recommend creating a bootable-clone backup—I use SuperDuper () for the task, although a Time Machine backup will do as well. To test a clone or other bootable backup, use the Startup Disk pane of System Preferences to boot from the backup drive. To test a Time Machine or other non-bootable backup, try restoring several files to make sure the process works.

Run Software Update: To to be sure you’re running both the latest version of Mac OS X—version 10.6.8, for example, included fixes specifically for the Mac App Store in preparation for Lion’s release—and the latest versions of any other Apple software that might be affected by Lion, you should run Software Update (from the Apple menu). In fact, as of July 19, 2011, Software Update should offer up a new Migration Assistant Update for Mac OS X Snow Leopard, which supposedly fixes some bugs when migrating data from a Snow Leopard Mac to one running Lion. If you don't see this update, use this link to download it manually. You should also check for updated firmware for your particular Mac model.

Disable FileVault: If you’re using FileVault, OS X’s built-in account-encryption feature, on any of your Mac’s accounts, I recommend disabling FileVault before upgrading to Lion. Why? For one thing, Lion uses a different (and allegedly new-and-much-improved) approach to encryption, and while Apple says you can keep using the Snow Leopard implementation for previously-encrypted user accounts, Lion’s approach is likely the better way to go. Plus, I prefer to not test Murphy’s Law by risking any incompatibilities between the two versions of FileVault. Similarly, if you’re using third-party disk encryption, you should probably disable that before installing Lion.

Check for Lion-compatible updates to third-party software: As with any major upgrade to Mac OS X, you’ll likely find that some of your third-party software needs to be updated to work with Lion. If you take some time to check compatibility before installing Lion, you’ll be in a position to get up and running immediately, rather than being frustrated by your favorite apps and add-ons not working. Especially useful for this task is RoaringApps’ growing list of Mac software and Lion compatibility. (This is one area where the Mac App Store shines: Launch the App Store app, click the Updates button in the toolbar, and you can update all your Mac App Store-purchased software with a click.)

RoaringApps.com is compiling a user-contributed list of Lion software compatibility.
The biggest offenders—in terms of being incompatible with Lion—will be programs and system add-ons that integrate with or hack OS X at a low level. Kernel extensions, for example, are notorious for being incompatible with major new versions of OS X, but you may also find that utilities that tweak the Finder, add-ons that enhance Mail, and other plug-ins and “enhancers” won’t work under Lion. So be sure to check vendor websites for Lion-compatible updates for your favorite software—including third-party System Preferences panes—before upgrading to Lion. If it turns out that a particular bit of software isn’t compatible with Lion but doesn’t have an update available, uninstall or disable it until a Lion-compatible version is released.
A bigger issue for some users will be older Mac software that hasn’t been updated recently—you may find that it doesn’t work at all under Lion. Specifically, PowerPC programs—software that was never updated to run natively on Macs with Intel processors—are dead in the water. Under previous versions of Mac OS X, Apple provided software called Rosetta that allowed PowerPC code to run on Intel Macs. In Snow Leopard (OS X 10.6), Rosetta was no longer installed by default, but OS X would offer to download and install Rosetta if you tried to run a PowerPC program. With Lion, Apple has taken the final step: Rosetta is officially kaput. So if you’ve got important PowerPC programs (for example, older versions of Quicken for Mac are still surprisingly popular), you’ll want to update those programs to Intel-processor versions, if available, before upgrading to Lion. If such updates aren’t available, you should find acceptable alternatives, whether those are modern Mac alternatives or, if need be, Windows versions that you can run under Boot Camp or virtualization software such as Parallels or Fusion.
How can you tell which of your applications are PowerPC programs? The easiest way is to launch System Profiler (in /Applications/Utilities), select Applications (under Software in the sidebar), and then click the Kind column header, which sorts the list of applications by processor type. Any programs listed as PowerPC will not work under Lion. (If you’ve got any listed as Classic, well, that ship sailed long ago.)
Have an extra drive handy?: While most people will simply install Lion over Snow Leopard, there are situations in which you might want to install onto an empty drive. For example, if you want to install Lion on a second drive to test the OS before upgrading your “production” drive, or if you want to erase your Mac’s startup drive and start anew. (The latter might be a good idea if your Snow Leopard installation has been having issues, or if your drive is nearly full or in need of repair.) As we’ll cover in our upcoming article on installing Lion, installing onto a secondary drive is simple. However, erasing your Mac’s startup drive and starting fresh means having a good, tested backup (see above) as well as a bootable Lion install drive, so now’s the time to start preparing.

Thanks to Lion’s Mac App Store distribution, the process of purchasing, obtaining, and installing Mac OS X should be faster and easier than ever—at least for most people. But it’s always good to be prepared, because the better shape your Mac is in before the upgrade, the better experience you’ll have afterwards. Now that your Mac is properly prepped.
Posted by Toukir Rahman