Learn How To Hack 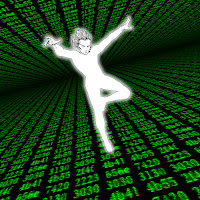 Disclaimer: There's nothing in this document incriminating, but just in case, if you're retarded and get caught, it's your fault.

You stay up all night on the PC typing and typing. No, you're not hacking. You're begging someone on IRC to teach you how to hack! Let's look at the facts:

1. You're a luser and you're annoying. No one likes you if you ask others how to hack without taking the least amount of innitiative.

2. You're not worthy of any title even resembling hacker, cracker, phreaker, etc., so don't go around calling yourself that! The more you do, the less likely you are to find someone willing to teach you how to hack (which is an infinitesimal chance, any way).

3. You're wasting your time (if you couldn't infer that in the first place). Many real hackers (not those shitty script kiddies) spend all their insomniac hours reading and, yes even, HACKING! (Hacking doesn't necessarirly (but usually does) mean breaking into another system. It could mean just working on your own system, BUT NOT WINDOWS XP (unless you're doing some really menacing registry shit, in which case, you're kind of cool).)

You're probably thinking, "Then what should I do. If no one's going to help me, how can I possibly learn to hack?" Have you ever tried READING (I assume this far that you are literate). Read anything and everything you can get your hands on! I recommend hitting a computer store and looking for discount books (books that are usually out of date, but so are a lot of the systems on the 'net, so they're still relevant!). You'll be surprised what you can learn from a book even when you're paying a dollar for every hundred pages.

I recommend the following books to start off with:

* Practical Unix and Internet Security (Sec. Edition): This is mostly a book about how to secure Unix (if you don't know what Unix is, either shoot yourself now, or read O'Reilly's Learning the Unix OS), but half of learning to hack is learning a system from the inside out. How can you expect to hack a site (w/o using a kiddie script, which i must restate, is NOT hacking) if you don't know how to use the system?!

* Sendmail in a nutshell: This is only after you read everything else. Sendmail, for those of you who still don't know, is a program that sends mail. It sounds stupid, but this is a buggy program, and usually is the avenue of attack many hackers take because of it's vulnerabilities.

* TCP/IP Blueprints: this will clear up a lot of things concerning TCP/IP.

* TCP/IP Administration: haven't read it, but can't wait to! (I've been bogged down by a lot of other REAL computer stuff).

That's it for now. If anything else interests you about the Internet, try to look up an RFC for it.

Read anything you can about Internet security in general (but not stuff like "How to Hack" (but keep reading this!)). Subscribe to mailing lists. Some of my favorites are bugraq, happy hacker (interesting stuff), and MC2. By now, you should be advanced enough to breeze through Carolyn Meinel's "Guide to (mostly) Harmless Hacking." It's got something interesting stuff, but not enough to be "3l1t3."

Okay, now for the big step: the step from lamer to hacker! If you have not already, install Linux. Now it's okay for you to go online to usenet groups and ask for help installing Linux, 'cuz quite frankly, if pretty f*** hard! NEVER, EVER, EVER expe ct to get it on the first try just right. The next thing to do is learn programming. I reco mmend learning C++ first because it will help you understand a lot about programming, it's easy to use, and is a lot like the other programming languages you should also learn. Read these books:

Now, you may be saying I may have been a bit hypocritcal by saying not to ask how to hack but to ask about installing Linux. The thing is that Linux people are usually pretty nice, and the people who are Linux gurus want more than anything for Linux to prosper, and are willing to help you out. Oh, by the way, if you've installed Linux the way you want it (which does not include throwing you Linux box out the window and yelling, "I LIKE THIS JUST FINE!"), congratulations. You have now earned my respect.

Okay, I mentioned kiddie scripts earlier, and I'll follow up on it now. Kiddie Scripts are auto hacking programs that will do all the work for you. You don't want that. I do condone downloading them and learning from them, but don't become a script kid die. The only place they go in life is jail (not where you want to be).

Now, you should know a great deal about hacking. You have a compendium of information at your fingertips with a mental index. You want the best advice? Don't hack. Odds are, you will get caught, and then it goes down on your criminal record, and unless you did something fan-f***-tastic, like hacking the white house security cameras and get video of Slick Willie getting a BJ, you can pretty much kiss your computer future goodbye, cuz no one will hire a convicted hacker. If you do hack, be a white hat hacker. For example, upon breaking into a site, leave a note maybe including how to contact you (not through the phones, mail, real email address etc., do it through a hotmail account or something) or how to fix it. They may be nice enough to offer you a job! That's right, there are some people who get paid to hack and do what they love.

In conclusion, you may have noticed that this was not a real guide to hacking.
This was a guide to LEARNING how to hack, which, if you want to be a real hacker, you will have to do

There is no one way to hack. (If so, it would be a lot easier for system administrators to keep you out!) It's a variety of different tricks as well as the ability to keep up with current vulnerabilities in software and hardware. You should also learn how to program. Even though Kevin Mitnick was infamous among the hacker culture for being the most wanted cracker, he couldn't even write his own exploits! That's pretty sad. Please use whatever information you have wisely and responsibly, and distribute it only to people who are worthy of it.
Posted by Toukir Rahman