JumpPad Is A Mac Style Launchpad For Windows 7

0 Software, windows 7 6:29 AM
JumpPad is a Mac OS X style Launchpad clone for Windows. It uses features like hot corners, adds start menu shortcuts to the launcher by default, has configuration options for icon size, folder paths to add shortcuts from and a reasonable memory footprint of 25 MB. It scans for specified folders and lists the available shortcuts to the launcher. 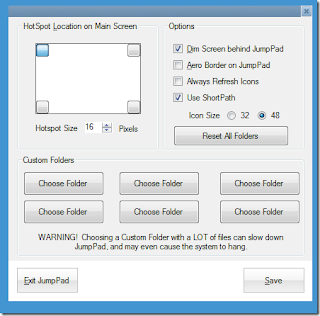 Closing the launcher (from X button) displays the configuration options which can be used to assign folders containing shortcuts (e.g. the Desktop) so that icons from a specific directory are displayed. You can assign upto 6 folders for this purpose. It is worth mentioning here that at the moment, this app does have afew issues and it can take a considerable amount of time after being launched. It took me a while to figure out the problem, which is in fact related to the number of directories and sub-directories that it requires scanning before displaying the launcher. This may be the reason due to which some users (using the previous version) have not expressed any issues with this app while others have had problems working with JumpPad. A solution to this issue is to add directories with minimum amount of shortcuts and sub-directories, in order to make it work. The developer too has mentioned that “If you have a folder with a LOT of files, JumpPad may Seem to Freeze, but this is not the case. It’s simply gathering all of the information that it needs”.

JumPad only works on Windows 7.