0 apple, how to, Mac, Mac OS X, Mac OS x Lion 4:11 AM
One of the features of OS X Lion that was discussed early on in its development was the updated text-to-speech technology that not only brings much more natural-sounding voices, but also has options for dialect and accent support for various regions of the world. Since early in the Classic Mac OS, Apple has supported text-to-speech technology, with very basic and robotic output that has improved over the years, but with Lion the technology takes a relatively major leap forward.

The system ships with some default voices, including the long-standing novelty ones such as laughing, whispering, bells, and alien voices, but now includes the option to enable high-quality male and female voices that mimic accents from numerous areas of the world. These include numerous European languages, Eastern European, Chinese, Thai, Japanese, other Asian languages, world variations of English (Indian, Australian, U.K., U.S., and more), and Middle Eastern languages like Arabic and Turkish.

The enhanced languages are a bit large at between 300MB and 1GB each. Like other aspects of the OS such as Java, Apple has made them available for download through the OS. To do this, follow these steps: 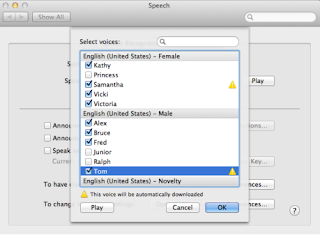 Apple's new voices are available along with all the older voices

If the voice is high-quality then there will be a yellow triangle warning next to it, indicating the voice will need to be automatically downloaded.

Voices will download through Software Update.
The system will automatically launch Software Update and install the desired voices when you click OK, after which you will be ready to use your new voices. Now just go to an application that supports Apple's Text to Speech (such as TextEdit, Safari, or Mail), select some text, and then right-click it and choose "Start Speaking" from the Speech submenu. This option should also be available in one of the application's menus, such as the Edit menu.
Posted by Toukir Rahman