0 add-on, Download, downloads, firefox, firefox add-on, how to, Software 6:21 PM
After watching a video on YouTube, you may want to save the video into your hard disk for playing it offline. Yes, it is simple; you can save it from your browser cache, there are add-ons and manual methods for that. But with Firefox 4 (beta), it is not easy as we think. Also, still there are no add-ons to view cache of Firefox 4 (I couldn’t find one). Why this is?

For security reasons Firefox has changed it a lot. Firefox 4 cache is now divided into several folders and sub-folders. Also, most of your files are now in large cache files, photos and videos are no longer as separate files. Moreover, the file extensions have also been removed.

Then, how to save a video from your Firefox 4 cache? You can do it very easily with the small tool VideoCacheView from Nirsoft. It automatically scans the entire cache of Firefox (and also Internet Explorer) and lists all cached video files. 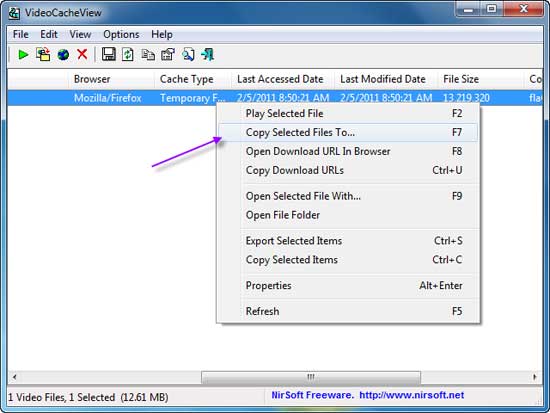 VideoCacheView is a portable tool. After watching a video in Firefox 4, just run VideoCacheView to find video files. After the video list is displayed, you can use one of the following options.

Play Selected File: Allows you to play the video file directly from the cache, assuming that you have a video player that is configured to play .flv files.

Copy Selected Files To: Allows copying the video files from the cache into another folder, so you will be able to play them in the future.

VideoCacheView (74Kb) can be downloaded at source here.
Posted by Toukir Rahman