Google Plus + Application For Iphone

0 Download, downloads, google plus, google+, iphone application, Software 9:46 AM
Google+ is expanding its mobile reach with today’s debut of an iPhone app dedicated to the new social networking site.

Up until now, clever iPhone users could have added a link to their home screens, but that still would have gone straight to the browser window. (Anyone who did this was also likely already a diehard Google+ addict.) 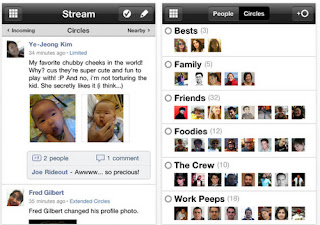 But that isn’t the case anymore. Google has released, as expected, a free app that is available immediately for iOS 3.1 and higher. The technical requirements are that this app only works for the following devices: iPhone 3G, iPhone 3GS, and iPhone 4.

The mobile interface isn’t much different from the ultra-simple and clean desktop version. The app features focus on Circles for sharing particular items with the “right people,” the Huddle for group messaging, and the Stream, which is basically a news feed from all of a user’s Circles.

Naturally, there has already been a dedicated Android app for some time now, downloadable for free from the Android Market.

The Goog’s foray into social networking debuted a few weeks ago, and it is still in invite-only mode. Nevertheless, the Mountain View, Calif.-based company asserted that Google+ already retains 10 million active users.

UPDATE: There are already issues with the Google+ for the iPhone app. Apparently iTunes picked up a test version of the app first, which was available to consumers to download for at least one hour and 40 minutes.

The correct version is listed as 1.0.1.1809. So if you don’t have that one installed, you’ll have to uninstall the first copy and then download this new copy.
Posted by Toukir Rahman