0 Download, downloads, Software 7:41 PM
My first CD burning software back in the Windows 95 days was Nero’s Burning Rom, a fast, elegant and lightweight program. Things have changed considerably since then and Nero is no longer the program that I use for disc burning. The weapon of choice so to speak is ImgBurn, which is a great program, best suited for advanced users.
Windows users have lots of alternatives at hand, to name a few: Tiny Burner, ISO CD Burner or Ashampoo Burning Studio Free.
Hamster Free Burning Studio falls right in line with those programs. The program, which is currently available as a beta version at the developer site, supports CDs, DVDs and Blu-Rays. The main menu lists the available options. Here it is possible to create a data CD or DVD, or Copy a CD or DVD. Options are provided to switch to a minimal mode or full mode, the latter is suggested as it resembles the interface that most burning programs share. 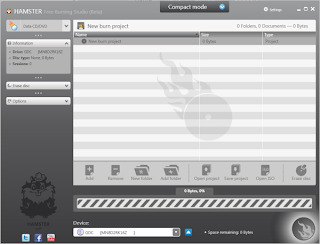 The limitations to only copy or create CDs or DVDs will likely be lifted once the program leaves beta. For now, it is only possible to run those tasks. This limits the functionality, as it is not possible to use the program to burn a music CD or video DVD at this point in time. The disabled Media Studio button will likely add that functionality to the burning software. Another functionality that is not included yet is the option to backup data, which will also be added in a later version. The final release has the following capabilities:

Free Burning Studio can read ISO images and burn those to disc. It can furthermore erase re-writable discs.
The program itself is promising, the lack of features however limits its use right now to copying and burning data discs. Windows users who would like to try Free Burning Studio can download the current program version from the developer website. The software is compatible with all 32-bit and 64-bit editions of the Windows operating system.
Posted by Toukir Rahman