Film Review: "The Tree of Life" 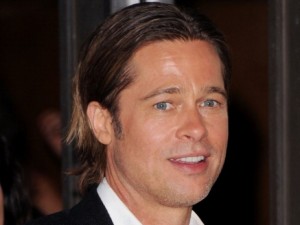 Brad Pitt, star of "The Tree of Life,"
arrives at the film's premiere.
If I recommend that you go to see writer/director Terrence Malick's new film, The Tree of Life, it comes with a caveat the size of a Cadillac: You must love cinema, and not just going to the movies. The latter activity is undertaken by restless kids and their escapist elders alike — a place to spend a hot summer afternoon where the phone doesn't ring and where one's physical comfort is matched by the familiar contours of a story that seems new, but which follows a wholly predictable, and thus satisfying, path.
If the latter experience sounds like a couple of hours well-spent, this may not be the film for you. Because while a few of the signposts in this sprawling journey are familiar to us — a mid-century, small-town Texas family: mom, pop and three sons — Malick is not content to let us get too cushy in our plush, upholstered rockers. Not before he's challenged fundamental notions of what belongs in a film, and what is better left out.
Just so there are no surprises, let it be known that in the midst of what seems like a conventional family drama intrudes an Imax-worthy, seventeen-minute sequence comprising a virtual history of the cosmos, from the big bang to the earth's formation to the emergence of biological life — dinosaurs included. How in D.W. Griffiths' name does one get from 1950s Waco, Texas to whirling nebulae to brontosauri without passing Go, well folks, that's the ten-buck question. Did you buy a ticket expecting a Sunday drive in the country, or to sit next to Michael Andretti at the Indy 500? Hold on tight.....
Now let it be known I am an itchy movie-guy to begin with — if a camera lingers for three seconds too long on a physical detail that doesn't advance the story, I generally feel like asking for an immediate refund. But once I understood that Malick's micro- and macrocosmic vision of Being were equally well-realized and -nuanced, I settled back for the 138-minutes it took to unspool and enjoyed it at a deeper, more emotional level than any film in recent memory.
Don't forget that Malick — the director of Badlands and Days of Heaven — used to lecture in philosophy at M.I.T. and even translated the arcane musings of German thinker Martin Heidegger. So alongside this familiar tale of a bitter, underachieving father (Brad Pitt), his angelic wife (a luminous Jessica Chastain) and their emotionally scarred three sons (one of whose passing generates the narrative), is the bigger story that enfolds them all: this water-covered, air-conditioned miracle planet we blithely call Earth.
In philosophy, there's a fancy phrase bruited about — ontogeny recapitulates phylogeny — which in simpler language means "as with the small, so with the large." What Malick is trying to communicate — as one who traffics in such arcane ideas — is that each lived life, from womb to tomb, is a kind of cosmos in miniature: a big bio-bang, an orbiting journey around a fixed center (family/sun) and, finally, a return to darkness. The amazing thing about his gifts is that he is able to detail the feeling of what it is to be alive — its triumphs and tragedies, or even mere sunlight streaming through shimmering leaves — in such a palpable way that one's conscious/critical mind relaxes and finally flows along with the stream of images and half-whispered voices without resistance.
Again, this is not — I repeat — not a popcorn movie! In fact, I defy you to eat a single Raisinet while taking on this light-year-wide, Technicolor mural. Love it or hate it, Terrence Malick adheres to what one of my college English professors said of James Joyce and his impenetrable novel, Finnegans Wake. "One thing you can be assured of," the genial academic remarked, "Joyce never spoke down to his readers." Even with its rhetorical excesses and soaring flights of anti-narrative, poetic fancy, heart and art are seamlessly merged together in The Tree of Life to unforgettable effect. Don't miss it.
Posted by Toukir Rahman