According to Sophos' Naked Security blog, "This particular scam doesn't use the actual Facebook video service as Paul has predicted they will do, but it certainly is trying to ride the media coattails and attention Facebook's announcement generated this week.

What is clever about this one is that if it were true that Facebook Video Chat was an application, you might be more easily convinced to approve the application to have more liberal permissions.” 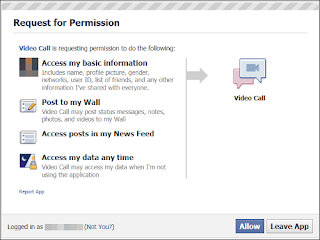 However, there are a few more noticeable problems with the permissions request if one actually takes the time to read. After all, why would an app that comes directly from Facebook ask to access your data at any time? Facebook can already do that. It could also be argued that a video calling app shouldn’t need to post to your wall and news feed, but Google Hangouts actually does something similar on Google+.

Apparently there will still be more scam targeting dudes, who will be taking advantage of the new Facebook features.

So next time you see a wall post on Facebook that says “Enable Video Calls,” don’t click on it. If you want to set up the valid and official version of Video Chat with Skype, check out Facebook’s authentic instructions. Never download any executables or other applications claiming to enable this service.
Posted by Toukir Rahman