0 downalods, Download, Software 4:50 AM
do you think of 3D photography intrigues you (like almost every other technology enthusiast) but you can’t afford a 3D camera or just aren’t crazed enough to spend the required amount of dough, say hello to Red Cyan 3D Camera – the next best thing. The freeware lets you capture Red-Cyan 3D images using dual cameras. You can use webcams too. The cameras should ideally be identical, facing the same direction and placed slightly apart (about 4 inches) from each other. The application allows single shots, timed capture and a sequence of shots that are separated by user-defined intervals and carry on for a user-defined amount of time. Alternatively, you can manually load and merge twin images into 3D (for instance, two slightly displaced photos of the same scene). 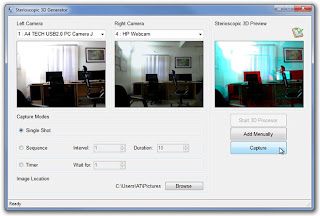 Red Cyan 3D Camera comes packed with a simple interface. The application detects all attached cameras and lists them in the dropdown menus, one each at the top of the Left Camera and Right Camera panels. Once you’re done setting up your cameras, specify the directory wherein you want the result to be saved, select the desired mode of capture, click Start 3D Processor, then click Capture. The application takes quite some time to process each result.

The Add Manually option allows you to import two images (of the same resolution), one each for the left and right camera. Clicking the Add button in the Add Manually dialogue box merges both imported images into a 3D result.
We didn’t have two identical webcams to test this app with so we had to use one in combination with a laptop’s built-in webcam. The results were a tad rough around the edges but acceptable. If you have twin webcams and have a thing for 3D photography, download Red Cyan 3D Camera from the link provided below and feel free to let us know how it turns out.
Download Red Cyan 3D Camera
Posted by Toukir Rahman