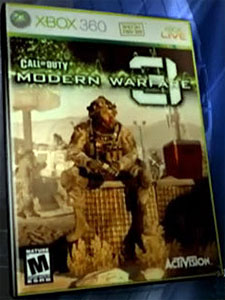 My partner went down. The auto turret I set up earlier in the fight could only do so much against wave after wave of enemy soldiers. Snarling dogs rushed my position as I pushed forward through a cloud of dust and debris. I bled ammunition in an attempt to punch past a pack of armored targets. There was nothing I could do as I crumpled to the ground just a few feet in front of my wounded ally. The screen blurred to a halt after enduring nine heart-pounding waves of enemy fire. I was told afterwards that nine waves is a respectable accomplishment for a first-time player of Modern Warfare 3's Spec Ops mode. I'll go with that.

Here at E3 2011, I wouldn't have expected to drool over Call of Duty: Modern Warfare 3. I lost interest in the series after enjoying the original Modern Warfare. Even the recently released trailers that showcase the impressive scale of Modern Warfare 3's single-player campaign didn't do anything for me. But after just one go at Spec Ops, the cooperative survival mode of Modern Warfare 3, I'm ready to sink some serious time into this shooter.

The basics are easy enough to wrap your head around. Two players team up to survive against an endless series of enemy waves. This can be done online or via split-screen on consoles. As you play, you'll unlock armories that can be accessed at any time mid-game to restock on ammunition, purchase new weapons, or call in support. All these options cost money, which you raise by scoring points for kills. Each wave is separated by a short break to give you and your partner a chance to regroup, reload, and wreck shop.


At the start of the game, things are easy enough. Enemies rush you with shotguns and your only defense is a pistol. But we all know a pistol is more than enough to handle a few chumps. After the beginning waves, things get more interesting. Dogs start showing up and they don't like you one bit. Soon after, the dogs will start charging you with explosives tied to their bodies. Similarly, enemy soldiers get more aggressive and come better equipped.

Fortunately, the money you save up can be spent on lethal knick knacks like automated turrets and explosives. You can even pay a little extra and call in a helicopter which will drop friendly troops into the frenzy to help you and your partner out.

Spec Ops, like other survival-based modes, is fun because each wave is a burst of adrenaline, followed by a brief break to catch your breath and coordinate with your buddy. Multiplayer modes that only call for two players don't suffer from the disorganization of larger team games (just try to coordinate 16 strangers during combat). With just two participants, the only chaos you need to deal with is coming from the enemy and not from your own ranks.

With solid communication and the right weapons, Spec Ops is a blast -- even when you know you're going to lose. Battles don't feel hopeless and deaths aren't frustrating because there's no real end goal -- you're playing for the thrill of the fight. It's the kind of mode I could see myself playing all the time, especially if I find a reliable partner. It was enough to ignite my interest in Modern Warfare 3, and it's something any Call of Duty player should check out when Modern Warfare 3 hits retail this November.
Posted by Toukir Rahman