Alcohol is prohibited in Quraan And BIble

Question : Why is the consumption of alcohol prohibited in Islam?

Answer
Alcohol has been the scourge of human society since time immemorial. It continues to cost countless human lives, and causes terrible misery to millions throughout the world. Alcohol is the root cause of several problems facing society. The statistics of soaring crime rates, increasing instances of mental illnesses and millions of broken homes throughout the world bear mute testimony to the destructive power of alcohol.
1.   Prohibition of alcohol in the Qur'an : The Glorious Qur'an prohibits the consumption of alcohol in the following verse:
"O ye who believe!
Intoxicants and Gambling,
(Dedication of) stones,
And (divination by) arrows,
Are an Abomination -
Of Satan's handiwork;
Eschew such (abomination),
That ye may prosper."
[Al-Qur'an 5:90]
2.   Prohibition of alcohol in the Bible : The Bible prohibits the consumption of alcohol in the following verses:

a.       "Wine is a mocker, strong drink is raging; and whosoever is deceived thereby is not wise."
[Proverbs 20:1]
b.       "And be not drunk with wine."
[Ephesians 5:18]
3.   Alcohol inhibits the inhibitory centre : The human beings possess an inhibitory centre in their brains. This inhibitory centre prevents the person from doing things that he considers wrong. For instance a person does not normally use abusive language while addressing his parents or elders. If he has to answer the call of nature, his inhibitory centre will prevent him from doing so in public. Therefore he uses the toilet.
When a person consumes alcohol, the inhibitory centre itself is inhibited. That is precisely the reason that an inebriated person is often found to be indulging in behaviour that is completely uncharacteristic of him. For instance the intoxicated person is found to use abusive and foul language and does not realize his mistake even if he is addressing his parents. Many even urinate in their clothes. Neither do they talk nor walk properly. They even misbehave.
4.   Cases of adultery, rape, incest and AIDS are found more among alcoholics : According to National Crime Victimization Survey Bureau of Justice (U.S. Department of Justice) in the year 1996 alone everyday on an average 2,713 rapes took place. The statistics tell us that the majority of the rapists, were intoxicated while committing the crime. The same is true in cases of molestation.
According to statistics, 8% of Americans commit incest i.e. one in every twelve to thirteen persons in America is involved in incest. Almost all the cases of incest are due to intoxication of one or both the persons involved.
One of the major factors associated with the spread of AIDS, the most dreaded disease, is alcoholism.
5.   Every alcoholic was initially a social drinker : Many may argue in favour of liquor by calling themselves 'social drinkers'. They claim that they only have one or two pegs and they have self-control and so never get intoxicated. Investigations reveal that every alcoholic started as a social drinker. Not a single alcoholic or drunkard initially starts drinking with the intention of becoming an alcoholic or a drunkard. No social drinker can say that I have been having alcohol for several years and that I have so much self-control that I have never been intoxicated even a single time.
6.   If a person is intoxicated just once and commits something shameful, it will remain with him for a lifetime.
Suppose a 'social drinker' loses his self-control just once. In a state of intoxication he commits rape or incest. Even if the act is later regretted, a normal human being is likely to carry the guilt throughout his life. Both the perpetrator and the victim are irreparably and irreversibly damaged.
7.   Alcohol is prohibited in the Hadith
The Prophet of Islam Muhammad (peace be upon him) said:
a.       In Sunan Ibn-I-Majah Volume 3, Book of Intoxicants, Chapter 30 Hadith No. 3371.

"Anything which intoxicates in a large quantity, is prohibited even in a small quantity."
Thus there is no excuse for a nip or a tot.
c.       Not only those who drink alcohol are cursed but also those who deal with them directly or indirectly are cursed by Allah.
According to Sunan Ibn-I-Majah Volume 3, Book of Intoxicants, Chapter 30 Hadith No. 3380.
It was reported by Anas (may Allah be pleased with him), that Prophet Muhammad (pbuh) said: 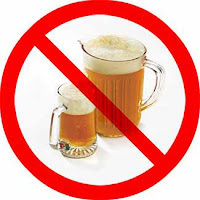 "God's curse falls on ten groups of people who deal with alcohol. The one who distills it, the one for whom it has been distilled, the one who drinks it, the one who transports it, the one to who it has been brought, the one whom serves it, the one who sells it, the one who utilizes money from it, the one who buys it and the one who buys it for someone else."
8.   Diseases associated with alcoholism
There are several scientific reasons for the prohibition of consumption of intoxicants i.e. alcohol. The maximum number of deaths in the world related to any one particular cause is due to the consumption of alcohol. Millions of people die every year only because of intake of alcohol. I need not go into the details of all the ill-effects of alcohol since most of them are commonly known. Below is a simple list of few of the alcohol related illnesses:
1.       Cirrhosis of Liver is the most well known alcohol associated disease.
2.       Others are Cancer of Oesophagus, Cancer of Head and Neck, Cancer of Liver (Hepatoma), Cancer of Bowel, etc.
3.       Oesophagitis, Gastritis, Pancreatitis and Hepatitis are linked with alcohol consumption.
4.       Cardiomyopathy, Hypertension, Coronary Artherosclerosis, Angina and Heart Attacks are linked with heavy alcohol intakes.
5.       Strokes, Apoplexy, Fits and different types of Paralysis are linked with alcohol intake.
6.       Peripheral Neuropathy, Cortical Atrophy, Cerebellar Atrophy are well-known syndromes caused by alcohol consumption.
7.       Wernicke - Korsakoff syndrome with amnesia of recent events, confabulations and retainment of memory to old events with different types of paralysis are mainly due to thiamine deficiency due to excessive alcohol intake.
8.       Beriberi and other deficiencies are not uncommon among alcoholics. Even Pellagra occurs in alcoholics.
9.       Delerium Tremens is a serious complication that may occur during recurrent infection of alcoholics or post operatively. It also occurs during abstention as a sign of withdrawal effect. It is quite serious and may cause death even if treated in well equipped centres.
10.   Numerous Endocrine Disorders have been associated with alcoholism ranging from Myxodema to Hyperthyroidism and Florid Cushing Syndrome.
11.   Hematological ill effects are long and variable. Folic acid deficiency, however, is the most common manifestation of alcoholic abuse resulting in Macrocytic Anemia. Zeive's syndrome is a triad of Hemolytic Anemia, Jaundice and Hyperlipaedemia that follows alcoholic binges.
12.   Thrombocytopenia and other platelet abnormalities are not rare in alcoholics.
13.   The commonly used tablet metronidazole (flagyl) interacts badly with alcohol.
14.   Recurrent infection is very common among chronic alcoholics. The resistance to disease and the immunological defense system are compromised by alcohol intake.
15.   Chest infections are notorious in alcoholics. Pneumonia, Lung Abcess, Emphysema and Pulmonary Tuberculosis are all common in alcoholics.
16.   During acute alcoholic intoxication, the drunk person usually vomits, the cough reflexes which are protective are paralysed. The vomitus thus easily pass to the lung causing Pneumonia or Lung Abscess. Occasionally it may even cause suffocation and death.
17.   The ill effects of alcohol consumption on women deserves special mention. Females are more vulnerable to alcohol-related Cirrhosis than men. During pregnancy alcohol consumption has a severe detrimental effect on the foetus. Foetal Alcohol Syndrome is being recognised more and more in the medical profession.
18.   Skin diseases are also related to alcohol indulgence.
19.   Eczema, Alopecia, Nail Dystrophy, Paronychia (infection around the nails) and Angular Stomatitis (inflammation of the angle of the mouth) are common diseases among alcoholics.
9.   Alcoholism is a 'disease'
Medical doctors have now turned liberal towards alcoholics and call alcoholism a disease rather than an addiction.
The Islamic Research Foundation has published a pamphlet that says:
If alcohol is a disease, it is the only disease that:
- Is sold in bottles
- Is advertised in newspapers, magazines, on radio and television
- Has licensed outlets to spread it
- Produces revenue for the government
- Brings violent deaths on the highways
- Destroys family life and increases crime
- Has no germs or viral cause
ALCOHOLISM IS NOT A DISEASE - IT IS SATAN'S HANDIWORK
Allah (swt) in His Infinite Wisdom has warned us against this snare of Satan. Islam is called the "Deen-ul-Fitrah" or the natural religion of Man. All its injunctions are aimed at preserving the natural state of man. Alcohol is a deviation from this natural state, for the individual as well as for society. It degrades man to a level below that of the beasts he claims to be superior to. Hence the consumption of alcohol is prohibited in Islam.
Posted by Toukir Rahman