PepsiCo Wakes Up and Smells the Cola

0 News And Information, Pepsi 6:43 PM
PepsiCo Inc. (NYSE: PEP - News) is turning its attention back to Pepsi.
The snack-food and beverage giant is launching the first new advertising campaign for its flagship Pepsi-Cola in three years—offering one of the most visible signs PepsiCo is throwing new weight behind its biggest brand after it sank to No. 3 in U.S. soda sales last year, trailing not only Coke but Diet Coke.
Ceding the top two spots to rival Coca-Cola Co. (NYSE: KO - News) marked a huge embarrassment in a cola war that traces its roots to the 19th century.
With summer in full swing, many Pepsi bottlers, who rely on soda for much of their profit, are anxious for the campaign to get off the ground.
[More from WSJ.com: PepsiCo Chief Defends Her Strategy to Promote 'Good for You' Foods]
"Would I have liked to have it 30 days ago? Yes," said Keith Reimer, chief executive of Pepsi Bottling Ventures LLC, who said he is excited PepsiCo is putting more money again behind cola.
Just last week PepsiCo was still racing to ready the "Summer Time Is Pepsi Time'' campaign, according to people close to the company. Adding to the scramble was the departure of PepsiCo's chief marketing officer for U.S. beverages, who resigned earlier this month, the latest of more than 15 marketing executives to leave PepsiCo's beverage group in recent years.
When industry market share numbers came out in March, showing Pepsi-Cola slipped to No. 3, analysts quickly accused PepsiCo—and Chairman and Chief Executive Indra Nooyi—of taking their eyes off the company's biggest brand.
Now, PepsiCo says it plans to spend about 30% more this year on TV advertising for its North American beverages, with soda a big focus. In addition to the summer ad campaign, Pepsi will be hawked on Simon Cowell's "X Factor'' in a $60 million sponsorship deal starting this fall. The company also recently launched new TV ads for Diet Pepsi and Pepsi Max, two smaller-selling colas.
[More from WSJ.com: Dodgers Slide Into Chapter 11]
Hailed as a strategic visionary since taking PepsiCo's reins nearly five years ago, Mrs. Nooyi is facing doubts from investors and industry insiders concerned that her push into healthier brands have distracted the company from some core products. Emphasizing fruit juice, oatmeal and Gatorade, she has set an ambitious goal of more than doubling revenue of nutritious products to $30 billion by 2020 while cultivating a corporate image tuned in to health and global social responsibility. Late last year, PepsiCo agreed to pay $3.8 billion to acquire a 66% share in Wimm-Bill-Dann Foods OJC, a leading Russian dairy-products maker.
"Is she ashamed of selling carbonated sugar water?" said Pat Weinstein, owner of Seattle-based Weinstein Beverage Co., an independent Pepsi bottler. "That's a question that is raised often by the most concerned of the independent bottlers."
U.S. sales of Pepsi-Cola and Diet Pepsi fell 4.8% and 5.2% in 2010, according to Beverage Digest, a trade publication and data service. Coca-Cola and Diet Coke sales also slipped, though more modestly, 0.5% and 1%, respectively.
Products that PepsiCo calls "good for you'' still make up only about 20% of revenue. The bulk still comes from drinks and snacks the company dubs "fun for you,'' including Lay's potato chips, Doritos corn chips and Pepsi-Cola, by far the company's single biggest seller with about $20 billion in annual retail sales globally. Some investors and PepsiCo bottlers say that Mrs. Nooyi has played down those products — the drivers of the company's current profit— in her push to emphasize PepsiCo's health initiatives.
[More from WSJ.com: Firms Loosen Grip on Cash]
Frito-Lay North America, PepsiCo's biggest profit engine, is battling rising commodity costs and PepsiCo's health and wellness portfolio is having its own set of problems. Over the past five years, PepsiCo's Tropicana fruit juices have been losing market share to Coke's Simply juice brand, while Coke's Powerade continues to chip away at Gatorade's dominance.
The company scaled back its earnings growth forecast earlier this year, blaming commodity prices and the global economic woes. It now expects earnings per share to rise by a high single-digit percentage annually rather than by the low double digits.
Critics also say PepsiCo isn't the salesman it used to be, pointing to marketing missteps such as a noisy compostable SunChips bag that led to a rapid sales fall-off and a makeover of Tropicana orange juice that had to be ditched.
In an interview, Mrs. Nooyi acknowledged that she may have spent a disproportionate amount of time talking about healthier products, but said it's part of a "deliberate strategy" to diversify the portfolio. Consumers increasingly want healthier foods and beverages, she said, and PepsiCo has to satisfy critics about health concerns.
"I look at our numbers and I feel very, very good about the trajectory of the company," she said.
In late 2008, Mrs. Nooyi turned her attention to North American beverages and a costly overhaul of all brands, as she said they were looking "tired on the shelf." Under the direction of her lieutenant, Massimo d'Amore, now the company's global beverage chief, PepsiCo launched new campaigns and graphics for all the big beverage brands and new packaging for more than 1,200 individual products, an unusually ambitious redesign.
Ad dollars for soda, however, were on the wane. As recently as 2005, PepsiCo spent $348 million on soda ads in the U.S., almost as much as Coke, which spent $377 million. But by last year, the company had more than halved its spending to $153 million, while Coca-Cola spent $253 million, according to Nielsen Co., which tracks advertising. While Coke also lost market share, to private-label brands and other players like Dr Pepper Snapple Group Inc. (NYSE: DPS - News), Pepsi's market share declines outpaced Coke's. 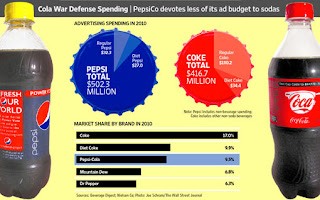 Pepsi skipped soda ads on the 2010 Super Bowl for the first time in 24 years, putting the millions of dollars it might have spent on those ads toward a $20 million online charity competition called the Refresh Project. The Refresh Project garnered 80 million online votes for charitable projects, but also ended up dominated by alliances and did little to sell sodas.
Despite their industry-wide slide, colas make up more than half of U.S. soda volumes and soda still represents a quarter of ready-to-drink beverages, dwarfing all other drinks sold, according to Beverage Digest.
Jim Tierney, chief investment officer at W.P. Stewart, says PepsiCo focused too much on redesigning Pepsi's logo and the Refresh Project instead of spending money on more traditional advertising.
"You just can't go dark on brands and expect them to hold their value,'' said Mr. Tierney, who is a bigger fan of the company's snack business.
This year, PepsiCo raised its advertising expenditure on beverages by 30%, with a renewed focus on cola. The new attention to beverages is paying some dividends. North American beverage sales volume rose 2% in the first quarter of 2011 from a year earlier, boosted by a 20% surge in Gatorade, rebounding from declines in 2008 and 2009. While cola lags, Mtn Dew and Diet Mtn Dew were among only a few big brand sodas whose sales grew last year.
Still, the overhaul remains a work in progress. U.S. beverage marketing chief Jill Beraud, recruited in 2008, departed earlier in the month, frustrated over having her hands tied in marketing decisions, according to some people close to the company. Ms. Beraud declined to comment.
Ms. Beraud's resignation came amid abroader reorganization that creates global marketing positions for key beverage brands. Mr. d'Amore said the changes will strengthen PepsiCo, even though he's "very sorry'' that Ms. Beraud left. Brad Jakeman, a video-game marketing executive, will head global marketing for the Pepsi brand.
Meanwhile, Mr. d'Amore said Pepsi is listening to its independent bottler groups. The company dialed back plans to launch a new low-cal cola this summer called Pepsi Next, after bottlers argued during meetings this spring that the focus should be on Pepsi-Cola. Rather than a national rollout, the company plans to test Pepsi Next only in Iowa and Wisconsin this summer.
"They have seen many more summers than I have,'' Mr. d'Amore said of the bottlers.
Posted by Toukir Rahman