Home » Computer Tips/Tricks » how to » How do I know which cables to use?

How do I know which cables to use? 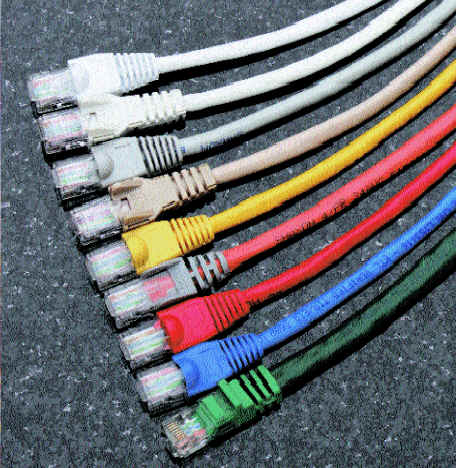 The cable selection at the electronics store could be renamed the "wall of confusion." Not only are there dozens of different kinds of audio/video cable -- some for stereos, some for home theaters, some for HDTVs and some for … who the heck knows? Even if you're lucky enough to find the cable you need, you still have to decide between super expensive and suspiciously cheap.

And then there's the salesman. "Have you heard of silver-plated connectors?" What? "If you're buying speaker wire, then you should also buy these stands that keep the wire from touching the floor." Why? "The more expensive the cable, the better the sound." Really?

­In this article, we're going to give it to you straight. We'll explain, in simple terms, what each type of audio/video cable does and where it should be used. Along the way, we'll debunk some cable myths, starting with the idea that the most expensive cable is the best.

The role of cable is to carry an audio or video signal from one device to another. Cables carry signals between DVD players and TVs, stereo receivers and speakers, and computers and video projectors. Cables don't change the nature of the audio or video signal they carry. They don't convert or process signals in any way. That's the job of the devices on either end. The cable itself is just the messenger.

Cables are made up of three basic parts: conductor, shielding and connector [source: Graves]. The conductor is the wire that actually carries the signal. One or more layers of shielding prevent the wire from acting as an antenna that picks up radio frequency interference (RFI) and electromagnetic interference (EMI) [source: Graves]. The connector is the plug at the end of the cable that connects to your device.

Cables are important components of any home stereo or home theater setup. If you don't use the right cables for the right job then you could end up with subpar sound or picture quality. And if you use cables that are damaged or otherwise junky, you could really end up with a lousy experience. For audiophiles, using low-end cables with a $5,000 plasma HDTV is like putting crappy tires on a Ferrari.­


Some audio/video experts argue that consumers should spend 20 percent of their total system cost on cables alone [source: Rushing]. The truth is that many cheaper cables offer a listening/viewing experience that most consumers could never tell from the really high-end cables [source: Rothman].

To keep things simple, we're going to break down the overwhelming amount of cable types into three categories: audio-only, video-only and audio/video cables that carry both sound and picture.

Let's start with audio-only cables. The most common audio cables are called analog RCA cables. These are the cables with red and white, or sometimes red and black connectors. RCA cables are widely used to connect devices like VCRs and DVD players to TV sets or CD players to stereo receivers. RCA audio cables come in pairs with two connectors on each end, a red one for right stereo and a white (or black) connector for left stereo. They are often bundled with video cables. Experts recommend gold-plated RCA connectors for extra protection against corrosion, especially if you live in a humid environment [source: Graves].

The other most common type of audio cable is speaker wire. Speaker wire runs from a stereo receiver to all speakers except the subwoofer (that requires a coaxial cable). Each speaker needs its own dedicated wire. Speakers not only receive audio signals via speaker wire, but also power.

Speaker wire is made from 99 percent oxygen-free copper and usually comes "unshielded," which means you can see the copper conductor. Speaker wire comes in different thicknesses or gauges rated from 12 to 18 (thickest to thinnest). As a general rule, the longer your speaker wire, the thicker the gauge you should use. For speaker wire lengths up to 20 feet (6.1 meters) long, 14-gauge is sufficient, but anything longer than 60 feet (18.3 meters) requires 12-gauge wire [source: ecoustics.com].

Speaker wire is fairly simple, so you can get away with buying inexpensive, bulk wire. And don't let anyone tell you that all of the speaker wires in your system need to be the same length. That's a myth [source: Cobalt Cable].

Most audio recordings are digital nowadays, and there are several newer cables that specialize in carrying high-bandwidth digital audio signals. Optical digital cable (also known as fiber-optic and Toslink) transmits audio signals as pulses of light and is impervious to interference [source: ecoustics.com]. Another digital audio cable is called digital coaxial. It looks the old coaxial cables that connect satellite dishes or cable TV signals to televisions, except this is specially designed to carry digital audio. You'll find optical and digital coaxial jacks on newer DVD players, CD players and stereo receivers.

The last type of audio-only cable is called analog multi-channel cable. This cable is designed for use with special players such as DVD-audio that play discs recorded at high sample rates for the maximum sound quality. Analog multi-channel cable consists of six to eight bundled RCA connectors, each responsible for a different audio channel on the back of a stereo receiver.

Component video cables consist of three RCA connectors colored red, green and blue. With component video, not only is color separated from picture, but the color portion is split into two separate signals [source: Miller]. The result is a super-sharp image with deep color saturation. Component video cables are ideal for connecting high-definition video components like Blu-ray players and HDTVs. Most home theater receivers come with several sets of component video jacks.


Lastly, we'll look at three kinds of cable that carry both audio and video signals. 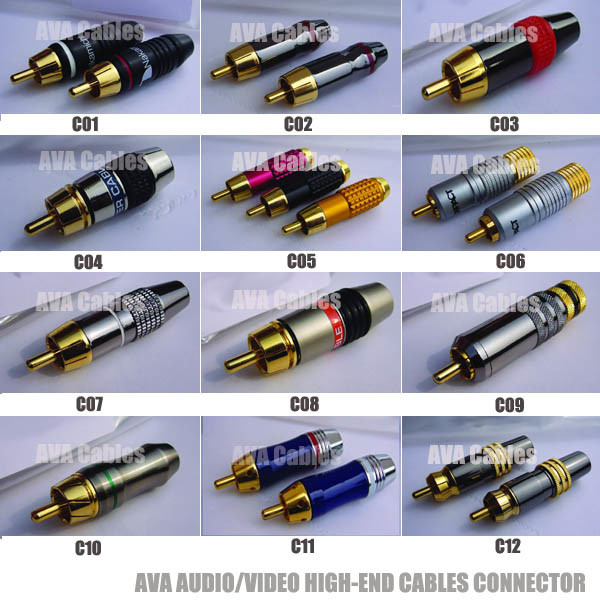 There are a handful of cables that transmit both audio and video signals. For years, coaxial video cables were one of the only choices for connecting video components. Coaxial video cables have that famous one-pin connector, sometimes called a stinger, that can either be pushed or screwed into place. Coaxial video cables are now mostly confined to outside connections, such as satellite TV or cable TV lines that come through the wall. A single coaxial cable carries both video and audio signals.
HDMI cables are an updated version of DVI. HDMI cables were also designed for use with HD components, but their connector is much slimmer, like a large USB cable. HDMI also includes HDCP copy protection. Manufacturers of HDMI cables tend to advertise their product as the only choice for connecting HD video components, but that's not true. DVI cables work equally well. However, if you're using an analog TV, all three work equally well [source: Cobalt Cable].

In Europe and the UK, the most popular dual-purpose cable is called SCART (Syndicat des Constructeurs d'Appareils Radiorécepteurs et Téléviseurs). SCART cables have fat, 21-pin connectors. In Europe, SCART cables do the work of RCA analog audio cables as well as composite, s-video and component video cables, but they can't carry high-bandwidth digital video or audio signals, such as those necessary for high-definition TVs. HDMI is the preferred cable in Europe for HD components.

FireWire, or IEEE 1394, cables are mostly associated with connecting devices to computers, but a few high-end home theater receivers and HDTVs now come with FireWire ports. FireWire is capable of carrying compressed MPEG-2 video and digital audio. You might use a FireWire cable to connect a digital video camera directly to your home theater system to show off some unedited footage.

To sum up, here are the cables that you would use for some common home entertainment systems.

For more information on home audio and video systems, follow the links on the next page.